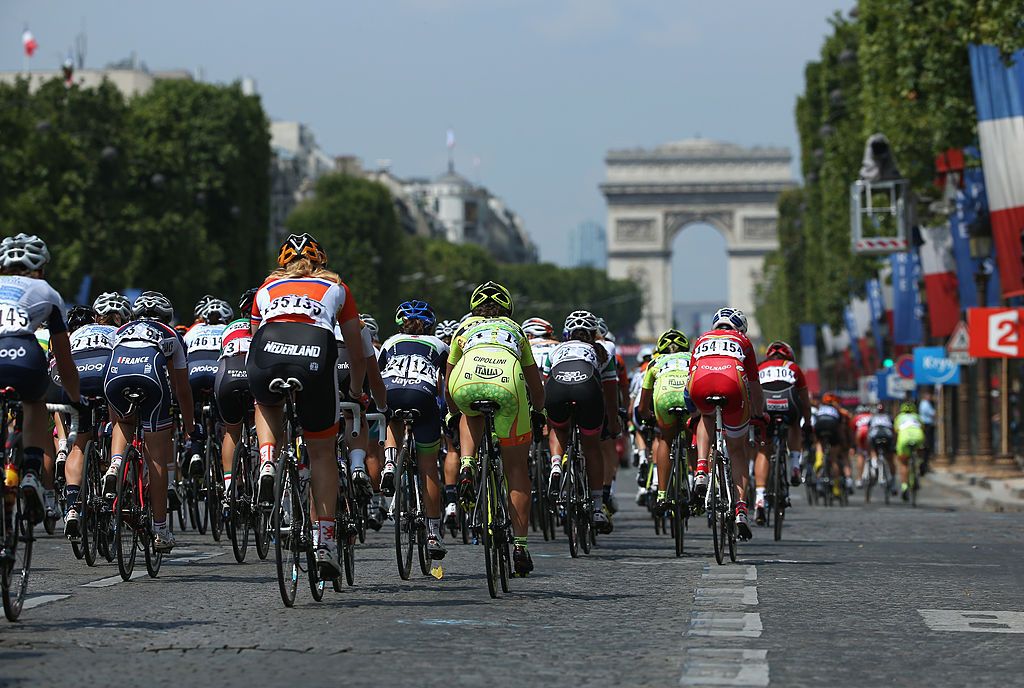 “In my view, you have to put to one side the idea of parity between men and women. Why? Because there was a reason why [the women’s Tour de France held between 1984-89] only lasted for six years, and that was a lack of economic balance. What we want to do is create a race that will stay the course, that will be set up and stand the test of time. What that means is that the race cannot lose money,” Prudhomme said, while also warning that if the new women’s Tour de France loses ASO money, then it could face another cancellation.

“Today, all the women’s races that we organise lose us money,” Prudhomme said. “Even so, we’ve been running Flèche Wallonne, Liège-Bastogne-Liège, La Course by Le Tour. There was the Tour of Yorkshire and the Tour de Qatar Feminin, there will be Paris-Roubaix in October. If it makes money, that’s great, but it mustn’t lose money, or it will end up like the Tour in the 80s, and it will die.”

The women’s peloton raced their first ASO-run women’s Tour de France in 1984, won by American Marianne Martin, but the event ended in 1989.

ASO has gone on to organise women’s one-day races in La Flèche Wallonne, Liège-Bastogne-Liège, La Course, and the inaugural Paris-Roubaix (scheduled for October). However, the organisation has been criticised for not including the women’s peloton as part of the official Tour de France for the past 30 years.

La Course by Le Tour de France was created in 2014 following a petition to ASO calling for a women’s Tour de France. Le Tour Entier’s petition was led by Kathryn Bertine, Marianne Vos, Emma Pooley and Chrissie Wellington and secured 97,307 signatures. The event is now heading into its eighth edition and will be held on June 26 in Brest in conjunction with the opening stage of the men’s Tour de France.

La Course has become one of the most popular events on the Women’s WorldTour in its seven seasons, but still, ASO had come under fire over the years for not following through with its promise to grow that event into a women’s Tour de France.

ASO confirmed to Cyclingnews that it plans to keep La Course running after launching its women’s Tour de France – speculated to be called Tour de France Femmes – in 2022.

“There are a lot of ways to look at Prudhomme’s comments; Blunt, sexist, maddening. The reality, though, is his pure ignorance,” Bertine told Cyclingnews on Wednesday when asked if there were elements of truth to Prudhomme’s comments or if it was wrong to have publicly framed ASO’s women’s races as being unprofitable.

Bertine recently published STAND: A memoir on activism. A manual for progress. What really happens when we stand on the front lines of change, which details, in part, Le Tour Entier’s petition for a women’s Tour de France, the creation of La Course, and meeting with ASO.

“First, women’s races do make money. The televised, streaming viewership stats prove the demand is there. I know, because we had access to the stats via Universal Sports in 2014, when I raced La Course. It was a huge success. The money was and is there,” she said.

“If ASO want to hide behind their inaccurate claim that ‘women’s events lose money’, they need to educate themselves. Fast. They’re the ones in charge of whether an event succeeds or fails. ASO must start promoting women’s events in the media equal to how they promote men. This isn’t rocket science.

“Imagine where cycling will be when ASO and UCI finally realize that women athletes are incredibly marketable. When done correctly, the entire sport of cycling will rise, thrive and be far more financially lucrative than it is now,” Bertine added.

“It isn’t the job of women cyclists to prove their worth – they already have. It is the job of ASO to invest in the athletes and races they create.

“The fact that we will have a 2022 women’s Tour de France is a game-changer. But Prudhomme’s archaic comments about women’s racing has a ‘set up to fail’ tone, and that doesn’t do much to prove ASO have evolved from their dinosaur views of women, sports and equality.”

Flanders Classics CEO Tomas Van Den Spiegel joined the discussion on profitability, emphasising the importance of having a long-term investment strategy in place for their women’s one-day events.

Flanders Classics has a four-year plan called ‘Closing the Gap’, launched last year, which included offering live broadcasting and bringing parity to the prize payouts. ASO has provided live streaming of La Course in previous years. Still, it only extended live coverage to Flèche Wallonne and Liège-Bastogne-Liège for the first time last year, under the UCI’s new requirement to be part of the Women’s WorldTour.

“We believe in women’s cycling, so instead of calling it ‘losing money’, I rather call it investing. We are almost at the tipping point where broadcasters and sponsors are wanting in on women’s cycling. We all just need to keep up the good work,” Van Den Spiegel said.

Cyclingnews reached out to ASO requesting additional information, clarification and comment, regarding the financial details of organising its women’s and men’s events along with their profits or losses, and for additional details of its plan to create a women’s Tour de France with longevity. ASO declined to comment on Prudhomme’s statements to the Guardian and on Cyclingnews‘ follow-up questions.

“Regarding the interview of Mr. Prudhomme with the Guardian we won’t make any further comment,” a representative from ASO wrote to Cyclingnews.

Prudhomme said that while ASO wanted to create a women’s Tour de France that would survive in the long term, he felt that there were challenges in figuring how “to set up a race that can live for 100 years”.

Part of ASO’s plan includes holding the women’s Tour de France the week following the men’s event. ASO has not revealed the stages or distance of the women’s event. However, it has been reported that it is expected to host an eight-day women’s race that would start in Paris on the same day the men finish their stage 21 of Tour de France on the Champs Élysées.

In an interview with Cyclingnews Wednesday, European champion Annemiek van Vleuten (Movistar) was pleased that Prudhomme confirmed the women’s Tour de France for 2022 after years of speculation about whether such a race would come to fruition.

“It’s good that the event has been confirmed,” Van Vleuten told Cyclingnews. “It is also good that it will be held the week after the men’s Tour de France. I have more confidence in this kind of set-up because it’s still related to the men’s Tour de France, but not at the same time, because then you are fighting something you will never win. The men’s event is so big.

“I believe in this concept, and I’m very happy that they put the two races together in the same period [back-to-back] so we have the people following our event as a stand-alone race.

“As Prudhomme said, the race will cost money, and we don’t want it to lose money. We need to sell ourselves, we need to have great stories, we need to be on television, and people need to watch this race. If it were organised during the Tour de France, we would only be a sideshow.

“It’s about money, and we need to have the fans, we need the television, and it needs to be marketed like the men’s Tour de France, so all that needs to be the same for the women.”

There has been an ongoing discussion on the timing of a women’s Tour de France. Some, like Van Vleuten, believe the race needs to be held separately, while others think ASO should host the women’s race at the same time as the men’s Tour de France alongside all its history and fanfare.

“I believe both races can and should be held concurrently, as it benefits the fans, sponsors and goes a long way to foster gender inclusion. We see this in most endurance sports, like marathon, triathlon and other cycling events,” Bertine said.

“That said, holding the women’s race directly after the men’s race can indeed be a very good ‘stand-alone’ event… but only if ASO invests equally in the media exposure and promotion of the women. If ASO treats the women’s race like an afterthought with less broadcast and media rights, fewer sponsor benefits and a dumbed-down route, then ASO is offering tokenism in place of equality and setting the race up to fail. They need to bring fresh, new marketing and media professionals on board, as so many of Prudhomme’s statements of women’s racing and capabilities are very, very antiquated.”

Martin thinks the women’s Tour de France should run like it used to, across 18 days and held simultaneously with the men’s event. She also thinks the events should share starts and finishes and use parts of the same route and iconic mountain passes like the Col du Galibier, Mont Ventoux, Tourmalet, and l’Alpe d’Huez.

“The perfect women’s Tour de France, in my mind, would be like we did it back in 1984. I think it should be held at the same time as the men’s race. Why would it be any different?”