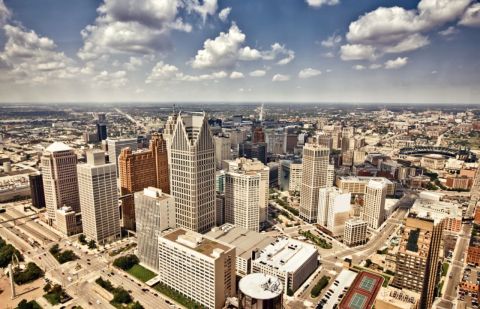 The Detroit market’s size and impact on the state’s tourism economy means that regional and statewide industry groups are watching monthly progress in the city for signs of a rebound.

At the same time, they’re warning that the suppressed revenue and occupancy could last well into 2023, and that if the shifts are permanent an undetermined number of hotels could close.

“(Detroit) is the most important region of the state — with more rooms than any other portion,” said Justin Winslow, president and CEO of the Michigan Restaurant & Lodging Association. “It has outsized importance to the industry overall.”

There are two key differences between the city and the rest of the state when it comes to Michigan’s nearly 1,400 hotels. The first is the concentration of rooms: There are at least 4,000 rooms in downtown Detroit and 40,000 across the region.

The second is the type of visitor the city attracts. About 30 percent of the market is business-related travel, while conferences and events drive much of the rest of it.

Still-slow gains in both of those sectors are keeping thousands of rooms vacant on a typical night.

The large, convention-oriented hotels that anchor the city mean that “downtown is much less diversified (than other areas of the state),”  Winslow said. “There are some really new, cool boutique hotels, but that market caters to large events.”

The American Hotel and Lodging Association said Detroit’s metro area ranks 12th among the 25 largest hotel markets in the U.S. when comparing a key profitability metric from May 2019, before the recession, to May 2021. Among the 25, just four were considered at peak or stabilizing: Miami, Tampa, Norfolk/Virginia Beach and Phoenix. At the other end, San Francisco is the worst, with a 70-percent decline.

According to the national industry group’s research, the revenue per available room — known as REVPar in the industry  — in metro Detroit declined 31 percent to $49. Two years earlier, it had been at $71.

The rate of decline is better than in other Midwest markets like Chicago (59 percent) and Minneapolis (51 percent), and it’s close to Orlando (30 percent).

However, Winslow said the trend is more stark in downtown, where this year’s revenue-per-room measure of $38.72 was “essentially flat” from last year. In comparison, the state as a whole increased 17 percent to $37.96. Nationally, hotels saw nearly a 13-percent increase in revenue per room in the first five months of the year.

“As bad as it is for Michigan overall,” Winslow said, “you can see some sizable gains” outside of Detroit.

But the industry’s revenue metric is that $50 per available room is a sign of viability, while less than that — like in Detroit — means “you are not making it.”

Other states reopened their economies earlier after initial pandemic closures than Michigan and many did not experience extended capacity restrictions — which the state lifted June 17 — that affected large-scale events.

It’s going to take time to rebuild the pipeline of activity that was lost when the state’s restrictions prompted gatherings to be canceled or drastically reduced, leading to a significant drop in hotel stays. Among them were the North American International Auto Show and the FIRST Robotics Competition, both of which had been scheduled for downtown’s TCF Center, formerly Cobo Center.

While cities like Grand Rapids, Ann Arbor and Lansing were also affected, it was metro Detroit — and in particular the city — where the most acute effects linger, Winslow said.

There are signs of hope, even after the city’s hotel occupancy “cratered” the week of January 9, when it was 10.6 percent, said Claude Molinari, president and CEO of the Detroit Metro Convention & Visitors Bureau.

“But we’ve seen a steady climb pretty much ever since,” he told Bridge Michigan.

In any other time, Molinari said, a year-to-date high of 38 percent occupancy would be awful, “but you’re seeing almost a quadruple recovery from when it was its worst.”

This summer, business travel related to the automotive and mortgage industries is helping, Molinari said. However, some travelers may be attracted to less expensive suburban hotels than downtown, where room rates are higher — by as much as $150 a night or more, and extreme discounting doesn’t seem to be taking place this month.

By fall, as employees at downtown’s top employers like Blue Cross Blue Shield of Michigan and Comerica return at least in part to their offices, their companies also expect business travel and conferences to resume, said Eric Larson, owner of Larson Realty Group and CEO of the Downtown Detroit Partnership, speaking at a Southeast Michigan Council of Governments event on Tuesday.

However, ongoing staffing problems at the hotels may still cap how many rooms they’ll be able to rent, Larson said. That was echoed by Winslow, who called the instability of the workforce the industry’s “biggest challenge,” affecting all areas of the state.

The Detroit Metro CVB is funded by a room surcharge paid by travelers, and it uses that money, along with member contributions,  to attract new visitors to the region. Bookings for 2022 are increasing, Molinari said. Among them are four undisclosed major international professional meetings and 800 professional meeting planners coming to the city in August 2022.

Another glimpse of a potential rebound comes from nearby Detroit Metropolitan Airport, where domestic passenger travel was up 5.8 percent this year as of the end of May. However, that wasn’t enough to generate a significant overall increase; international travel was nearly 62 percent below the first five months of 2020. The number of total passengers passing through the airport increased 0.8 percent during that period.

Boosting international travel once the U.S. international travel restrictions end is one key to restoring Detroit’s hotel industry, Molinari said. Leisure travelers from Germany and England are part of a typical year’s higher room occupancy, along with visitors from places like Canada, Japan and China, who come to the region for business.

Defining the city as a vacation destination due to regional outdoor activities is another strategy, Molinari said, to bolster domestic leisure travel numbers.

Forecasts call for group hotel business around the state to pick up in 2022, said Larissa Draves, executive director of the Michigan Association of Convention and Visitor Bureaus. But signs of it should start by this fall, as wedding venues and conference sites change their deferred plans to meet in person.

“It’s not like once we’re allowed to reopen, you flip a switch and everything comes back,” she said.

Winslow said the industry is closely monitoring the pace of business travel in Michigan. One concern is that it will rebound, possibly to 75 or 80 percent of 2019 totals, then plateau.

At that point, he said, the industry would have to confront that it has too much capacity, a situation that would adversely affect metro Detroit.

“There’s a whole segment of hotels that exist to meet that need that we might have too much supply for,” Winslow said.