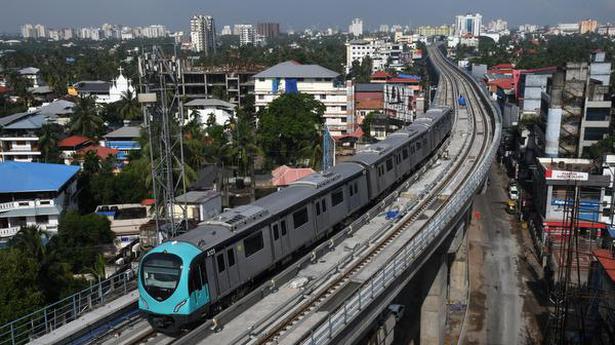 ‘Metro neo can be readied at ₹75 crore per km, compared to ₹300 crore for conventional metro’

Faced with the ₹5,182-crore Kochi metro encountering a daily loss of around ₹1 crore and recording not even 10% of the passenger patronage mentioned in the DPR, urban transport experts are demanding that metro neo, metro lite, or modernised bus transport systems be adopted for its extensions and for mass rapid transport systems (MRTS) mooted for Thiruvananthapuram and Kozhikode.

This comes in the wake of fears that the Kochi metro might become yet another agency entrapped in massive losses, like the KSRTC, if the State government does not opt for practical and cost-effective ways while choosing MRTS for the three cities. Many tier-II cities and a Delhi metro extension have chosen metro lite over the conventional metro rail system.

The Kochi metro’s ₹1,957-crore Kakkanad extension and light metros mooted for Thiruvananthapuram and Kozhikode are awaiting clearance of the Union Cabinet and the Centre respectively.

Chief executive officer of WRI India and former urban transport specialist of the World Bank O.P. Agarwal said the Kochi metro could well have a ‘metro neo’ system on the Kakkanad route. “It can be readied for around ₹75 crore per km, as compared to around ₹300 crore for the conventional metro. The metro system might be ideal for extensions that take off from the terminal points of the Kochi metro — from Aluva and Thripunithura.

But metro neo is better for the Kakkanad extension, since it takes off midway (from Jawaharlal Nehru International Stadium station, Kaloor) from the Aluva-Thripunithura metro corridor. Commuters can switch to metro neo from the stadium. Even in the conventional metro, commuters to Kakkanad will have to disembark from the metro’s Blue Line and board trains on the Pink Line [the Kakkanad extension], since it would be a different viaduct altogether,” he said.

Elaborating on metro neo, which finds mention in the Centre’s new Metro Act along with metro lite, Mr. Agarwal said it had many advantages over the conventional metro and metro lite (which is a tram-like system). “Here, articulated buses [longer versions of buses] having rubber tyres would operate along a dedicated pathway on roads. Their advantage over the conventional metro is that they can be operated along steeper gradients and can negotiate sharper curves. They weigh much less than metro trains and do not need a viaduct [whose construction entails extensive quarrying to source aggregate],” he said.

Among the MRTS options, metro neo looks promising due to its relatively low cost and the multiple energy sources (electricity or even hydrogen sourced from overhead lines) using which the buses can operate, said Shivanand Swamy, professor and executive director at the Centre of Excellence in Urban Transportation, Centre for Environmental Planning and Technology (CEPT) University, Ahmedabad.

At-grade (at road level) MRT systems work best, since commuters can check in easily and without hassles like security check and climbing up to the metro platform. They also ensure optimal use of road space, since they occupy 0.86 sq.m space per person, as compared to 3 sq.m space occupied by a car carrying a single passenger. Cars also worsen pollution, congestion, accidents, and parking problems, Prof. Swamy added.