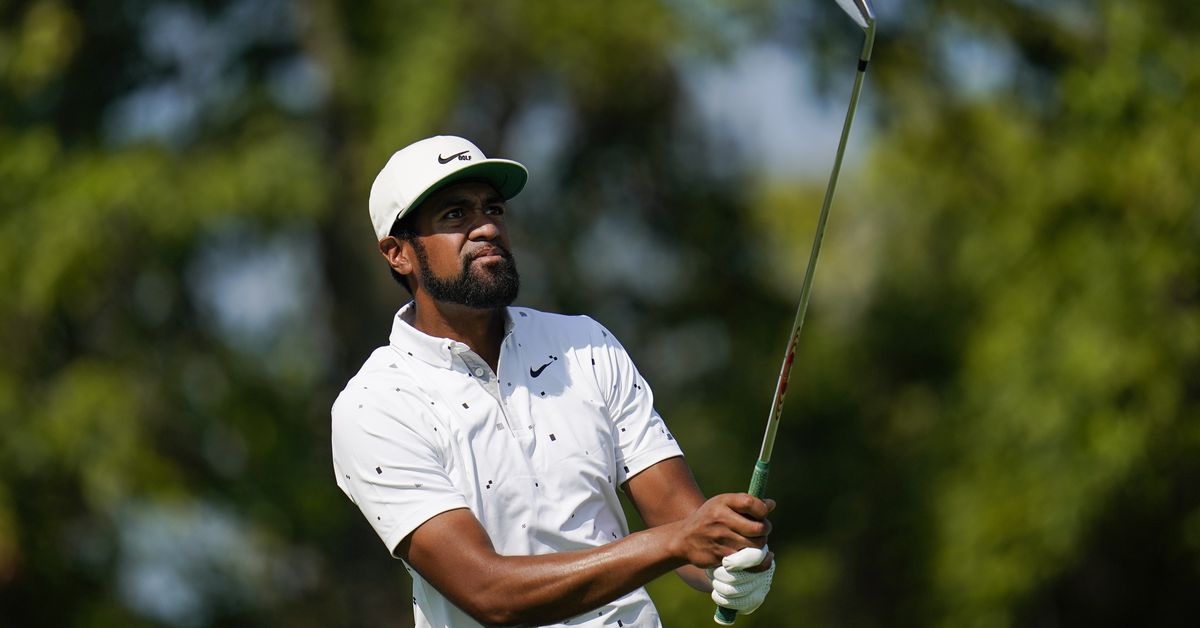 By getting “thousands” of congratulatory texts, including messages from Tiger Woods, dozens of his fellow competitors on tour and his Utah Jazz heroes, Donovan Mitchell and Mike Conley.

He also pounded down two big meals — one at Ruth’s Chris Steak House with his caddie, his manager and his swing coach, Boyd Summerhays, and another at McDonald’s at 3 a.m. with Summerhays because neither could sleep after the breakthrough win at The Northern Trust, the first leg of the FedEx Cup playoffs.

“I had a lot (of food), And I had no problem cleaning all of it up. I haven’t been into fast food like I was when I was a kid (growing up in the Salt Lake City neighborhood of Rose Park). But I felt like it was worth the price of admission at the time.” — Tony Finau on a trip to McDonald’s after his big win Monday

“Yeah, it has been wonderful. It has been a fun couple days since Monday, since that last putt dropped,” Finau said Wednesday in a news conference prior to the BMW Championship in Owings Mills, Maryland. “I have been able to share this win with so many that I did know about, so it has been really cool to see the amount of joy a lot of people have for my success.”

Finau’s first victory since the Puerto Rico Open in 2016, easily the biggest accomplishment of his outstanding career, not only vaulted him to the top of the FedEx Cup standings, it moved him from No. 22 to No. 9 in the Official World Golf Rankings.

It also caused him to put on a few pounds.

His meal at McDonald’s: A Big Mac, a Double Quarter-Pounder with cheese, 10 chicken McNuggets, an Oreo McFlurry and a bottle of water.

“And I had no problem cleaning all of it up,” Finau said. “… I haven’t been into fast food like I was when I was a kid (growing up in the Salt Lake City neighborhood of Rose Park). But I felt like it was worth the price of admission at the time.”

Finau said he got to sleep about 5 a.m., woke up at 8 a.m. Tuesday morning to work out, then jetted over to Maryland.

Down-to-earth stories like that are part of what makes Finau, 31, one of the most likable players on tour, and a big reason why plaudits poured in from everywhere Monday night and all day Tuesday.

“It has been really cool to see how many people are following my career and were genuinely happy for my victory,” Finau said.

“I kinda starved my fans and supporters of a win for five years, so this one is special in that I have gained a lot of fans in these five years and to be able to share this with so many people has been very very special,” he said.

Finau called the text message from Woods, who is recuperating in Florida after he was seriously injured in a February car crash in California, one he will never forget. Finau has said over the course of his career that Woods and the late Kobe Bryant are his greatest sports heroes.

Woods “just explained to me that he was proud of me and the fighting grit that I had,” Finau said. “So that was obviously a very, very special one to me. He was one of the first to text, which meant he was watching, which for me is very, very cool. I have to throw that out there as the one (message) at the top.”

“I kinda starved my fans and supporters of a win for five years, so this one is special in that I have gained a lot of fans in these five years and to be able to share this with so many people has been very very special.” — Tony Finau

The success may cost Finau some facial hair.

In another story that illuminated Finau’s humility and humanity, he said he told his wife, Alayna, before the FedEx Cup playoffs that he wasn’t going to shave his beard off until he made the Ryder Cup team, or won another tournament.

“So those are the two goals going into these playoffs, and I was able to knock that right off,” he said. “So don’t be surprised if you guys see me tomorrow and she’s all gone.”

The beard, that is.

Finau, who is of Tongan and Samoan descent, also spoke Wednesday about what his win does for Polynesians around the world, and in Utah, where he is revered statewide by all walks of life.

“I wouldn’t say there is a weight that I feel,” he said. “I think there is a responsibility that I have to just act according to what I believe, and how I was raised. … The Polynesian culture is a very respectful culture, a very loving culture. I try to represent that in who I am and what I do.”

Finau had played in 143 consecutive tournaments without winning before Monday’s breakthrough at Liberty National Golf Club. In winning, he not only took down Jon Rahm, the No. 1 player in the world, but shook off criticism that he isn’t a closer.

He had finished in the top 10 in 39 PGA Tour events since the win in Puerto Rico, which was downplayed in some circles because it was played opposite a WGC event with a stronger field.

Wednesday, he addressed that criticism with nothing but class.

“I have had a lot of disappointment and frustration from those losses, but I took it on the chin and I wanted to get better from it,” he said. “I asked, ‘What can I learn from it and how can I persevere through it?’ I didn’t get discouraged. The biggest part was I used it as fuel to do better, to try and learn and not think about how impossible it is to have a feat such as winning a golf tournament, and a big one.”

Finau retold a story of how he stomped his feet around a golf hole and “acted like a child” after losing a chance to make a playoff for medalist honors in the Utah high school golf championships his freshman year at West High in Salt Lake City. He ended up five-putting on the 18th green.

His father, Kelepi, didn’t say a word to him about it on the drive home, “but just from that silence I understood what it meant to him. That that’s not how you act,” Finau said. “I was so disappointed in myself that I said that’s never going to happen ever again. That was a teaching moment for me.”

Finau tees off at 9:21 a.m. Thursday with Rahm and Cameron Smith, the Australian he defeated in Monday’s playoff.

We share your excitement for the game! Get daily updates on our best coverage of your favorite teams.