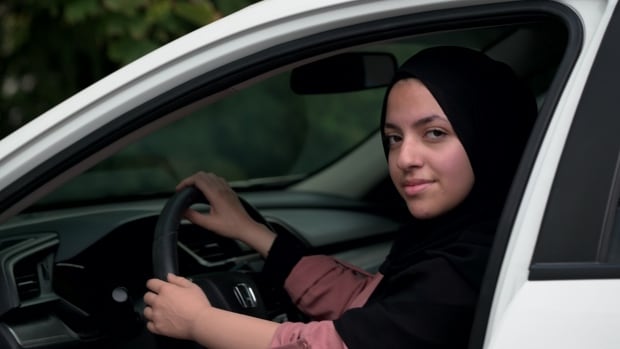 When Meriyam Jahim walked into the DriveTest centre in Newmarket, Ont., on her birthday, she expected to walk out with her learner’s permit like any other 16-year-old.

“I was excited,” she said. “I was even studying and revising in the car.”

Six weeks later, she still doesn’t have it.

When Jahim arrived at the testing centre and told staff she was missing her left arm below the elbow, she was told she needed special medical approval from the Ontario Ministry of Transportation.

So she filled out the approval form. But when she called the ministry weeks later to check on the status, she says she was told she didn’t need special approval — and that she should have been able to write her G1 test on her birthday.

“I will never forget me looking at the other teenagers walk into the room, easily able to take their written test,” she said. “I keep remembering that and it hurts.”

‘I want to see change in the system’

The Ministry of Transportation told CBC News that amputees do require additional review before they can write their G1 test.

But as for why Jahim was told she should have been able to write her exam, the ministry didn’t comment.

Jahim is calling on the ministry to post and clarify the process for amputees who want to apply for their learner’s permit so others like her are not left in the dark.

“I want more than just my licence,” said Jahim. ‘I want to see change in the system.”

Jahim told CBC News she could find no information online about a separate process for amputees to apply for their driver’s licence.

“There should be a clear procedure on their website as to how this whole process works because I’m getting various different stories and it’s not making sense,” said the teen.

After being told she could not write her G1 test, she spoke with friends who have similar amputations. All of them were able to write their test without special medical approval from the province, she said.

The ministry told CBC News every new applicant must declare whether they have any conditions — including amputations — that may interfere with the safe operation of a vehicle. Declaring these conditions triggers what’s called a driver medical review, which requires a letter from a medical professional clearing the applicant to be able to drive safely.

The Ministry of Transportation sent Jahim a letter days after the ministry was first contacted by CBC News. The letter said Jahim needed a doctor to review her case or she would “be prohibited from obtaining a driver’s licence.”

The War Amps, an organization that advocates for amputees in Canada, told CBC News in a statement that “there appears to be no limitation in being able to write the knowledge test to obtain a G1 licence.”

“While we certainly support that safety is of the utmost importance as it relates to driving, this young amputee was met with an unfortunate and disheartening situation which precluded her from being able to write her G1 knowledge test, with what appears to be no basis.”

Ableist discrimination ‘rampant across this country’

Bonnie Brayton, the Executive Director of the Disabled Women’s Network, says people with disabilities are often caught in systems that aren’t designed for them. Jahim’s case is an example of a process that is “fundamentally ableist, discriminatory and wrong,” she said.

Earlier this year, a Quebec man was denied his driver’s licence because he was missing part of his left hand. He argued that because he did not face any physical limitations, he should have been able to receive his licence just like anybody else.

Similarly, Jahim says she’s never seen herself as lacking the ability to safely drive. She uses a prosthetic “sports” arm that allows her to kayak, jump rope, and ride a bike — and does not need any vehicle modifications to be able to drive safely.

Brayton says barriers like what Jahim faced can be devastating.

“It’s like a punch in the stomach when it’s something as big as being denied your licence.”

For now, Jahim said she may go to another centre to write her G1 test. But in the meantime, the experience has shaken the confidence she has in all her abilities.

“I’ve always told myself that I can do whatever a fully able person can do but in a different way,” she told CBC News. “What happened with the Ministry of Transportation made me doubt that.”

The ministry says it will review its process.