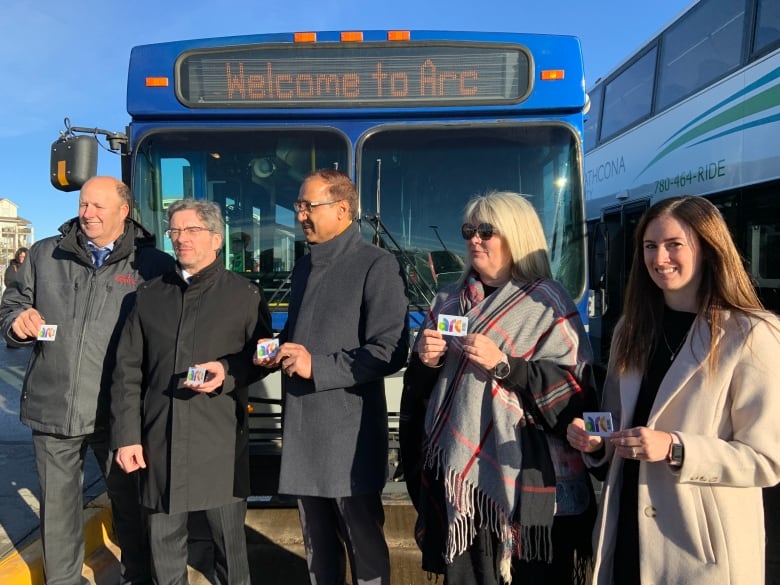 Edmonton has officially launched an electronic fare system for public transit nearly a year after it originally planned to switch to smart cards.

On Monday, Arc cards were available for adults to buy and use on LRT and buses within Edmonton and the neighbouring municipalities of Beaumont, St. Albert, Spruce Grove and Strathcona County.

Leduc and Fort Saskatchewan will start offering the Arc option to riders next year.

Carrie Hotton-MacDonald, branch manager for the Edmonton Transit Service, said the system has been proven to work after a year-long pilot.

“We’ve had piloteers helping us test it for over a year, we’ve had U-Pass students helping us and we’re ready to go,” she told reporters at the official launch of the Arc card system at the West Clareview Transit Centre on Monday.

“We’re not anticipating any difficulties, everything’s been tested.”

Mayor Amarjeet Sohi, who was at the official launch along with representatives from neighbouring municipalities, acknowledged the electronic fare system took longer than previously thought.

“We wanted to make sure the technology works,” he said.

The mayor is optimistic many riders will start using the cards.

“It’s one card that allows you to ride on transit seamlessly,” Sohi said. “It’s a very good sign of collaboration among regional municipalities.”

Cathy Heron, the mayor of St. Albert, said the municipalities have been trying to implement the electronic card readers for at least five years.

She said the system will make it easier for residents in St. Albert to commute to Edmonton and back.

“My personal hope is that we’ll bring in more transit riders into the future because that’s what we want — we want the majority of trips around the region being on a bus or on the LRT instead of an individual car.”

Riders tap the card on the validator when getting on a bus or LRT and tap off when disembarking so the system calculates the correct fare.

Riders who neglect to tap the card on the validator could be issued a fare evasion fine. Those forgetting to tap off could be charged a commuter rate for going between municipalities rather than a local rate.

The fares are valid within a 90-minute window, the city said.

Cards can be purchased at vending machines in transit stations and centres, in-person at service counters, online and at select retailers. They cost $6.

Users can load money onto the card at any increment, with a minimum of $4.00.

Riders can check their balance and trip history through an account online or over the phone. and add money to their accounts anytime.

Arc will also roll out to other fare groups next year, including seniors, youth and individuals experiencing low income as well as riders who use paratransit services.

The Arc system cost approximately $53 million with around $28 million from the provincial GreenTrip Grant, Hotton-MacDonald said in an email Monday.

Arc is the brand unveiled by the city and regional partners last summer, symbolizing a path between two points similar to how transit connects people to services, each other and the region.

Arc’s implementation is about a year later than originally planned. Hotton-MacDonald said the system is complex.

“Each region has its own fare policies, structures and processes that required additional time and testing to ensure the new system was fully functional,” Hotton-MacDonald said.