State unveils museum of energy in Utica; opening May 10 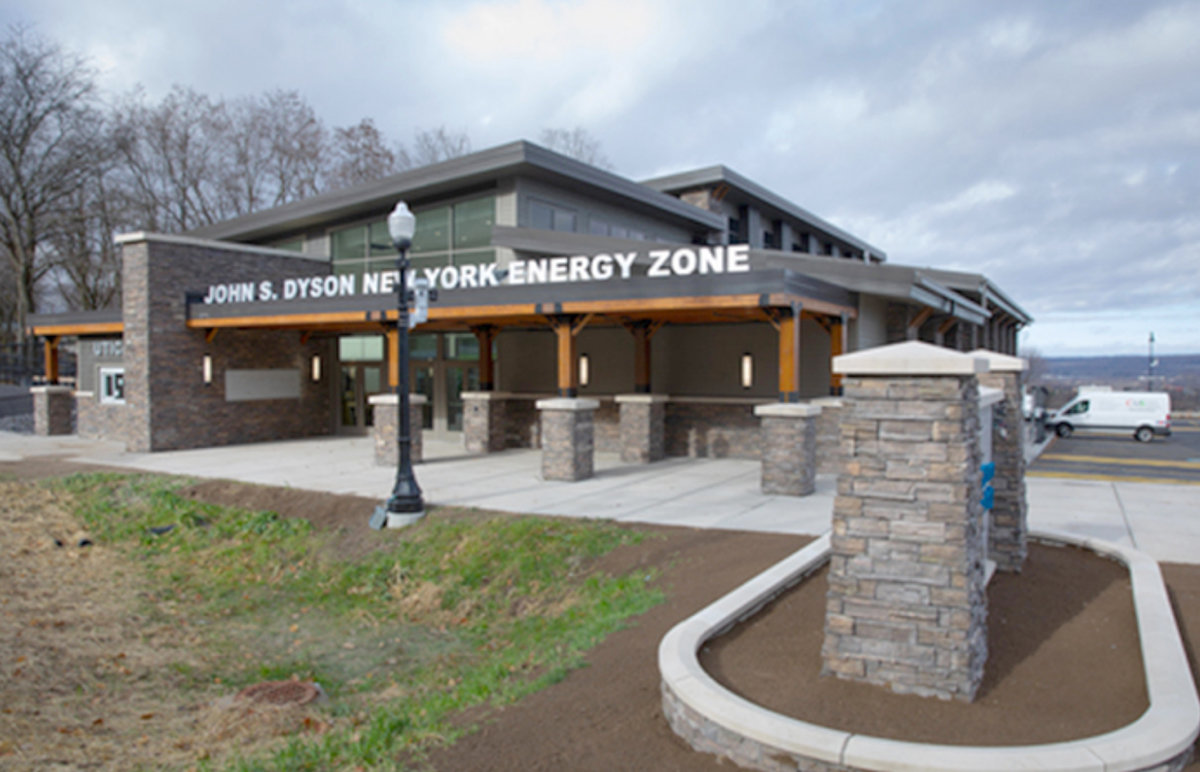 Located next to the Utica Zoo, the newly constructed admission-free John S. Dyson New York Energy Zone, designed and financed by the New York Power Authority, is expected to open to the public May 10. The facility was dedicated Friday, to help recognize Earth Day.

“New York has an incredible story to tell about its role in the development of electricity, dating back to when Thomas Edison first lit up Manhattan in 1882, and now we have a stunning new facility in the heart of our state to highlight this storied history to residents and visitors alike,” Cuomo said. “The John S. Dyson New York Energy Zone in Utica could not have come at a more exciting time as the energy industry continues to evolve before our eyes. Every day we are moving toward a clean energy economy, and this new facility will inspire future leaders in this booming industry to help us address our clean energy challenges and meet the goals we’ve set as part of our ambitious climate agenda.”

“I visit the Power Authority’s Niagara Power Vista in Lewiston every chance I get and now I am thrilled that I’ll be able to learn even more about the New York energy story at the New York Energy Zone in Utica,” said Lt. Gov. Kathy Hochul. “NYPA’s first-class visitors centers attract visitors from around the world. This energy museum will help boost the local economy as more tourists visit the area. Educators from around the state and beyond will appreciate what the museum has to offer in Science, Technology, Engineering and Mathematics programming, and we will all benefit by inspiring new leaders in these fields as we transform our energy system to a zero-emission electricity sector by 2040.”

The facility features unique exhibits that simulate flying a drone to check on power transmission lines, controlling electricity on an energy grid, operating a power plant, and building a micro power grid along with many other interactive activities designed to teach visitors about the past, present and future of energy in New York State.

Exhibits throughout the museum reflect input and information from New York’s major private utilities; NYPA’s sister agency, the New York State Energy Research and Development Authority (NYSERDA); and the New York Independent System Operator (NYISO) as well as industry trade groups. Each entity shares its role in the energy and electricity story of New York State that is highlighted throughout the Energy Zone.

The facility also is home to a STEM Lab — a space dedicated to science, technology, engineering, and mathematics and focused on student learning. The STEM Lab’s programming will be developed in partnership with local educational entities with an expertise in STEM and will host hands-on educational experiences and special events.

“Utica is a natural location for this museum of energy because it complements the work of our Frederick R. Clark Energy Center, NYPA’s system-wide energy transmission complex in Marcy,” said Anthony J. Picente Jr., NYPA trustee and Oneida County executive. “I am grateful to my colleagues at the Power Authority for their vision in conceiving and developing this magnificent facility in Oneida County that will inspire our next generation of energy leaders and benefit all New Yorkers for decades to come.”

All visits to the new John S. Dyson New York Energy Zone will follow New York Forward COVID-19 safety precautions. For more information or to schedule a time to visit after May 10, go online to https://www.nypa.gov/communities/visitors-centers/ny-energy-zone.

“I am pleased that the new John S. Dyson New York Energy Zone is complete and thank NYPA and all the partners who worked to bring this project to fruition,” said state Sen. Joseph A. Griffo, R-47, Rome. “This facility will highlight the past, present, and future of energy in New York and the important role that our region plays in its delivery across the state. It also will ensure that NYPA has a major presence in all of the state’s prominent energy producing and transportation centers, which I had requested and advocated for.”

“I think that the New York State Museum of Energy in Utica will be a great addition to the many tourist attractions New York has to offer,” said Assemblyman Brian Miller, R-101, New Hartford. “This museum will be devoted to the past, present and future of energy and who better to develop it then the New York Power Authority. It is important for us to provide information such as what will be in this museum so that the youth of our communities can learn more about where we have come from and what they can do to improve life in the future. I look forward to the grand opening next month.”

Utica Mayor Robert Palmieri said, “Due to hard work and coordination with many partners, I am excited to welcome the New York State museum of energy to Utica, which is now formally dedicated as the John S. Dyson New York Energy Zone. This facility will be a tremendous asset for our community as it will educate and inspire our residents and serve as a destination for visitors from across the state and country. I thank NYPA for their continued investment and support.”

NYPA has three other admission-free visitors centers near its major hydropower projects. The centers, which feature exhibits that demonstrate the production of electricity, also educate the public about clean energy and host community events. NYPA’s Niagara Power Vista, minutes from Niagara Falls; its Blenheim-Gilboa Visitors Center in the Catskills; and its Frank S. McCullough, Jr., Visitors Center and Boat Launch at Hawkins Point on the St. Lawrence River offer outdoor recreation opportunities on the grounds and nearby.