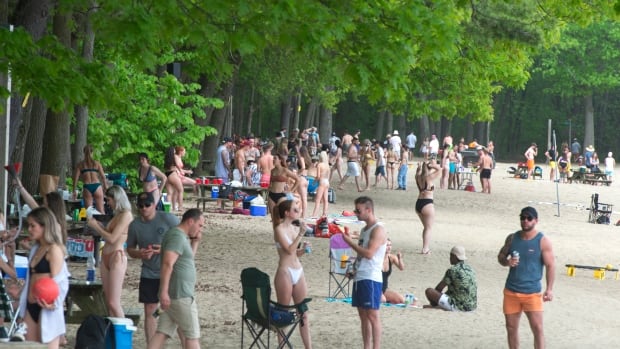 The public health restrictions in Quebec are loosening up and while there will soon be a mad dash to gyms, restaurant terrasses and backyard barbecues, summer vacation options are slim pickings.

The U.S.-Canada border is still closed, and there’s no telling when interprovincial crossings will open. Health Canada still says all non-essential travel should be avoided, so planning a staycation — or a “Quebecation,” if you will— appears to be the only sure bet.

The Quebec government wants its residents to have a good time without heading abroad, so it’s offering up discounts on provincial park passes as well as subsidized activities and vacation packages. Last year, the province made a similar push heading into the first summer into the pandemic.

“The pandemic has had negative consequences for tourism businesses. These initiatives are a way for the government to revive the industry,” said Quebec’s Minister of Tourism Caroline Proulx.

“I honestly believe that we will have a better tourist summer, especially with the return of festivals.”

SEPAQ passes half off starting June 1

For the second consecutive year, access to Quebec’s 23 provincial parks, known as SEPAQS, will be half off for the first 140,000 customers.

At a mere $40.63 for the entire year, these half-price access cards sold out fast last year and the parks subsequently led to record-breaking attendance. The passes will be available through SEPAQ’s website on June 1 at 9 a.m.

Last year, they were scooped up fast.

Along with being able to visit any park in the SEPAQ network, cardholders get a handful of discounts such as 25 per cent off parking at supervised beaches in Oka, Mont-Orford and Yamaska ​​national parks.

This discount is made possible by a $5-million investment by the Quebec government, according to the Minister of Tourism, Caroline Proulx, who said the investment then spills out into the surrounding communities.

“For each adult who sets foot in a SEPAQ park, $62 is generated for restaurants, shops, and local purchases,” she said.

But if you miss your chance to get a SEPAQ pass, there are hundreds of vacation packages available to people who want to explore the province.

There’s the Explore Québec program  that offers travel packages with participating travel agencies at a minimum of 25 per cent off. There are more package deals available on Quebec Getaways as well.

Be it hiking and canoeing on the Batiscan River for a week or a three-day getaway in Saguenay-Lac-St-Jean, there are plenty of choices.

Montreal invests in attracting visitors back to city

Montreal is offering up a range of activities as well. Back in March, Mayor Valérie Plante said anyone thinking about visiting downtown this summer should come on down.

Plante’s administration teamed up with the Montreal chamber of commerce, the Quartier des spectacles, Tourisme Montréal and other stakeholders to produce a $25-million plan to attract visitors.

The plan includes a campaign to promote downtown restaurants, money to support merchants in Chinatown, free parking on weekends until Labour Day, support for festivals and the circus arts, and organizing other events.

La Ronde, an amusement park located on Île Sainte-Hélène, in Montreal, reopens its doors on Saturday, but visitors and employees must comply with several health measures given the pandemic.

“This year, we are ready,” Plante said in March.

“We’ve been working for a year together, and we all have this strong will of making our downtown friendly and fun and exciting again.”