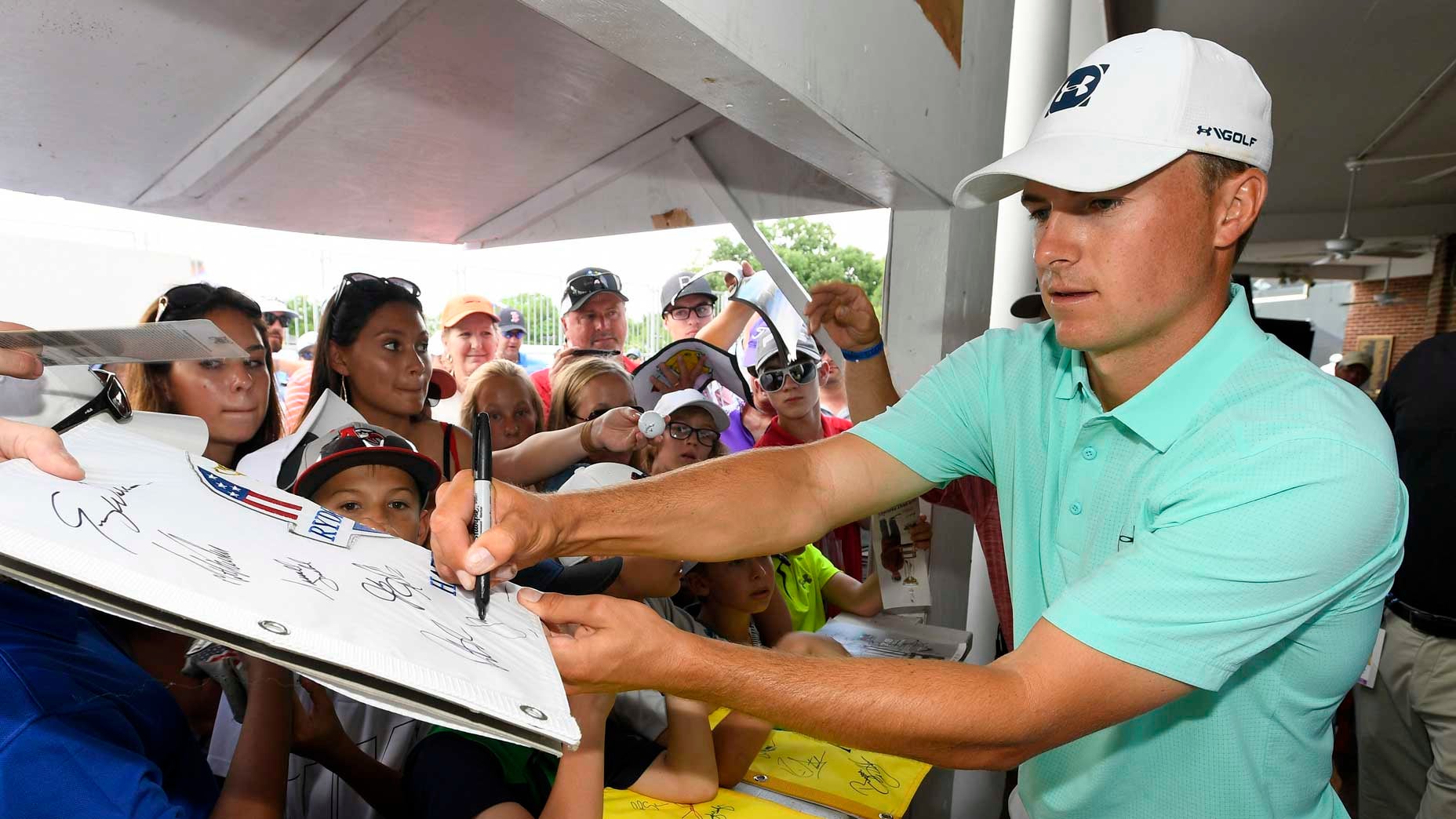 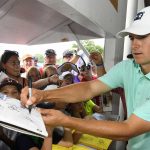 Jordan Spieth would have earned a year-end bonus in 2019 if the Player Impact Program was live then.

Check in every week for the unfiltered opinions of our writers and editors as they break down the hottest topics in the sport, and join the conversation by tweeting us @golf_com. This week, we discuss the recently public Player Impact Program, ‘Team Mullet’ winning the Zurich Classic, a slightly different LPGA schedule and more.

1. Australians Marc Leishman and Cameron Smith won the Zurich Classic, edging out South Africans Louis Oosthuizen and Charl Schwartzel in a playoff. The Zurich is the only official PGA Tour event in which players compete as two-man teams, with the winning team evenly splitting both first- and second-place money and FedExCup points. Is one team event on the Tour schedule one event too many, too few or just right?

Sean Zak, senior editor (@sean_zak): It’s about one too few, which is close to just right! Anything less than one is just boring. Watch that playoff (and the few holes before it) Sunday and imagine what an exclusively alternate-shot event would play out like. Teams ripping around the course, nervous about every single shot. That’s super engaging golf for everyone at home.

Josh Sens, senior writer (@joshsens): It’s the right number but the wrong format. One team event during the regular Tour schedule is plenty (we get our fill of two-on-two’s in the Ryder Cup and Presidents Cup), but it should be alternate shot, which is the undisputed GOATF: greatest of all team formats.

Dylan Dethier, senior writer (@dylan_dethier): You’ll get no argument from me on alternate shot as the GOATF. I think there’s clearly room for one more team event that pairs PGA and LPGA players and features stroke-play qualifying and match play on the weekend to conquer two big-money winners.

2. The PGA Tour has instituted a bonus system that will reward its most popular players. According to Golfweek, the Player Impact Program will spread $40 million to the 10 players who have the highest “impact score,” an amalgam of data based largely on social-media metrics. The system has been in place since Jan. 1, and the highest-ranking player at the end of the season will pocket $8 million. (The program was quickly viewed as a response to the would-be Premier Golf League, which was promising to pay the game’s superstars huge sums to play in its events.) What do you make of the popularity payouts?

Zak: They are 100% validated and also a horrible look. I’m not here to tell the best male players in the world that they shouldn’t be able to derive fair market value for their abilities (both on course and off), so go for it. But I’m also very aware of the lower rungs of professional golf. We all are. If that much money can be awarded for a popularity prize, during the later stages of a budget-tightening pandemic, then why isn’t there more money to go around in other parts of pro golf? Why didn’t the Canadian Tour host a respectable number of events in 2020? Why is their 2021 schedule still unannounced? A lot of whys go unanswered when the rich get richer.

Sens: What do I make of them? They are the inevitable result of a media culture that has turned everything in life into a high school cool-kid contest. It’s depressing, but I get it. I’m not a boomer, after all. Almost, but not quite. And I suppose it could be interesting to see what crazy lengths some players go to get a higher “impact score.”

Bamberger: That’s perfect, Josh. But that doesn’t mean we have to sit here and take it. I think it demeans the PGA Tour.

Dethier: Players were already being rewarded for their popularity and “impact” through ad deals, sponsorships, appearance fees and more. I’ve always seen the PGA Tour’s job as putting on tournaments and paying the winners. It seems off to me, then, for the Tour to pay its most popular players — but I guess the simplest way to think about it is that they’re advertising for themselves and they’re investing where they’ll get the highest return. It can make sense but I don’t have to particularly like it.

Bamberger: I agree with that, too. But do we really need ‘particularly’ in that last sentence? I don’t have to like it and I don’t.

3. There were mixed opinions among players over the program. Xander Schauffele and Patrick Cantlay said it wouldn’t push them to be more active on social media, while Marc Leishman said he is trying to bolster his social media presence. Do you suspect the program will get players paying closer attention to their Twitter and Instagram accounts, or will most players carry on as they have been?

Zak: I think more players will look to partner with brands that can help show off their personality. We won’t see the Xanders of the world tweeting a bunch more, but we might see Xander appear on a bunch of podcasts. Brooks Koepka is clearly aligning himself with Barstool Sports already, and much like Kevin Kisner that’s going to pay off incredibly for him. (Good idea, too, when you’re injured.)

Sens: Sean’s right. The key factors in the equation will be personality and pursestrings. We aren’t likely to see sudden tweet-storms from successful players who weren’t already inclined to post a lot on social media. But for those who dig the digital life, for sure. They’ll be on their phone even more.

Bamberger: Marc Leishman was being polite. He’s not changing anything. He’s too smart, and comfortable with himself, to get into this numbers chase. Most players will carry on as they have been. If a guy is No. 3 on the list late in the season, he might try to get a late-inning rally started. You know, fan contests to see what club he should hit on the first par-3, etc. #Sad.

4. The LPGA Tour winner’s circle this season is an all-star team: Jessica Korda, Nelly Korda, Austin Ernst, Inbee Park, Patty Tavatanakit, Lydia Ko and now Brooke Henderson, who won the Hugel-Air Premia LA Open. For the second week in a row, the LPGA finished on a Saturday. Do you prefer a Saturday finish for LPGA events, given it provides separation from the final round of PGA Tour events?

Zak: It’s less about the Saturday finish for me and more about the Wednesday start. An entire day of the week devoted to women’s golf, the courses that host women’s golf, the sponsors that enrich women’s golf, the caddies who loop for LPGA players, etc. I know it’s lame for women to alter their schedule to be opposite what the men’s game has standardized, but it might not be a bad business decision.

Sens: Personally, the Saturday finish doesn’t make a big difference; I find it easy enough to toggle back and forth between two events and I’d rather devote just one day of the weekend to being a couch potato anyway.  But if it gets more eyeballs on women’s golf, I’m all for it. In that respect, it seems like a smart move.

Bamberger: So sensible, both the Wednesday start and the Saturday finish.

Dethier: It’s not just the Saturday bit that’s fun — it’s the primetime bit. When the LPGA plays on the west coast and the PGA is on the east coast, we golf fans get a proper balance of consumption. Personally I’d love to see more staggered events so that tournaments wrapped up on Saturday nights or even Mondays — but I don’t think the numbers have yet backed that up as a strong business decision. Not everyone can watch golf on the first workday of the week, after all.

5. A month after world No. 1 Dustin Johnson said he is passing on the 2021 Olympics, Australian star Adam Scott said he, too, will sit out the Games. Scott’s manager told Golf Channel that “it is pretty much the only time up until October when he has a chance to see [his family] for a stretch of time.” Do you think we’ll see more top players step back as the Olympics near, as we did in 2016? Or will DJ and Scott be outliers?

Zak: Yes we will. Whereas Zika seemed like a family-man play back in 2016, staying home during the Olympics might seem like even more of a family-man play. Adam Scott sees no other holes in his schedule? He’ll take a break and be in full dad mode. It’ll be healthy for him, I’m sure. And his family, too. Even if I hate the field weakening.

Sens: No doubt. Though the number of WD’s is going to depend on a certain other number on the ground in Japan. A lot could change pandemic-wise between now and late July in Tokyo.

Bamberger: It’s the year, and the place. Tokyo in the summer of 2021 does not sound like something most people would go out of their way to do. We’ll see more withdrawals and most guys will be too polite to say why in a truthful way. Just bad luck.

Dethier: I love the Olympics, so I wish more top pros were going to play. But I’m also not interested in pressuring them to do so if they don’t love the Olympics. These guys can play a 72-hole stroke play golf tournament nearly 50 weeks out of the year if they want to, so it’s hardly surprising they’ll skip the one that doesn’t have a prize pool. (Winning a gold medal might help with their PIP, though …)

6. If you were playing in two team events — one on the PGA Tour and another on the LPGA Tour — who would you pick as your teammates, and why? And, yes, they must accept!

Zak: Jordan Spieth, because he can play from anywhere, and I’ll definitely put him everywhere. And Lydia Ko, because she’ll put me in the fairway. And on the green. And they’re both playing great. Who’s gonna take second behind us, Michael Bamberger and Mel Reid? Josh Sens and Jessica Korda?

Bamberger: If you’re throwing down the gauntlet, Zak, Mel and I are in! (If you’re willing, Mel.)

Sens: Lee Westwood, because the guy just seems to be having so much fun out there. And since Sean snagged my favorite player in Lydia Ko, I’ll happily go with the player he assigned me. If this is match play, Korda-Sens close out Zak-and-Ko 7-and-6. Bamberger and Reid don’t even figure in the picture.

Zak: Zak and Ko. sounds like a great company name. I’ll have to see what industry Lydia wants to dive into with me as her business partner.

Dethier: As someone who dreams of becoming a better irons player, Ko’s a great choice and I’m jealous. But I’m going with Inbee Park because she seems like a ton of fun AND happens to be playing the most consistent golf in the world right now. On the men’s side I’ll take Patrick Reed, just so I know what it’s like to partner with the biggest lightning rod in team-related golf. Zak-Spieth vs. Dethier-Reed would mean the entire crowd was against us. That’d make for my best GOLF Magazine story yet.