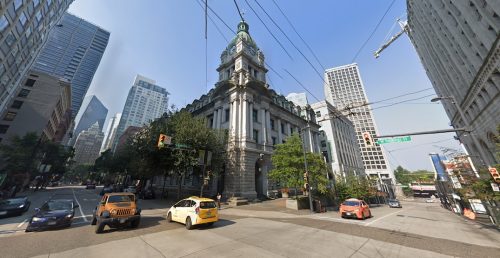 An ambitious plan by the federal government to redevelop its historic Sinclair Centre city block with a vertical expansion for a significant office space addition, while also integrating the complex with the urban fabric of downtown Vancouver’s Central Business District, is now taking its next steps.

Earlier this year, the federal government began the procurement process of seeking a contractor to conduct preliminary design and technical work for the centrally located landmark project.

A design firm will be selected by the end of Summer 2021, with the federal government indicating it has received four separate bids from Henriquez Partners Architects, Hariri Pontarini Architects, HH Angus and Associates Limited, and Architects Alliance.

This redevelopment, with a project budget of roughly $500 million, would revitalize the federal government’s strategic hub in downtown Vancouver.

The preliminary concept calls for a total floor area of between 807,000 sq ft to 1.08 million sq ft (75,000 to 100,000 sq metres), inclusive of a sizeable portion of the floor space within the historic buildings that would be retained and revitalized, including much-needed seismic upgrades. In addition to the revitalized and new additional office space, there would also be new public spaces and retail uses.

The federal government has outlined the key principles for achieving a very high degree of green environmental design to the extent that it is a “sustainability showcase,” improving the office workplace conditions for civil servants, integrating with the surrounding area and streetscape, and conserving heritage components.

“Density [on the site] has never increased since a hundred years ago and the conservative sturdy stone buildings interact less and less with the urban fabric of a young, dynamic metropolis and important gateway to Asia. Sitting near the edge of the Pacific, globalization has largely passed the Sinclair Centre by,” states the federal government’s rationale for the project.

The four buildings that create Sinclair Centre in downtown Vancouver. (Government of Canada)

The complex is composed of four buildings, with the iconic formal main postal office building in the southeast quadrant of the city block bearing the most heritage value. Built in 1910, it has the most heritage value, deemed as the city’s best example of the Beaux-Arts classicism architectural style and distinguished by its high mansard roof and domed corner clock tower overlooking the intersection of Granville and West Hastings streets.

The 1909-built RV Winch Building on the southwest quadrant of the city block was BC’s first office building with a fireproofed steel frame and reinforced concrete floors. It is one of the most ornate office buildings built during Vancouver’s Edwardian-boom years, and a number of original interior features, such as tile-work, mosaic floors, stained glass panels, and marble staircases, have survived.

At the northwest quadrant, the Customs Examining Warehouse, completed in 1913, was part of the pre-World War One program of public building construction, when there was a need for large-scale, heavily constructed warehouses to handle the federal government’s requirements for imported goods. This warehouse building had direct access to the CPR terminus tracks immediately to the north, along the waterfront side of the block.

The youngest of the buildings is situated on the northeast quadrant, next to Granville Street and closest to Waterfront Station. Built in 1937, the Public Building is deemed as one of the city’s top examples of the Modern Classicism architectural style.

In the early 1980s, ahead of Expo ’86, all four buildings underwent a significant revitalization, with the gaps between the buildings covered by a glass atrium to create an indoor mall with retail space and a food court. Henriquez Partners Architects, one of the current bidders, was part of the design team for this renovation work. A direct entrance from the indoor mall into the SkyTrain Expo Line area of Waterfront Station was added as part of the retrofits.

Although this revitalization project integrating the unique buildings won architectural accolades, over the decades the commercial complex has failed to see the type of visitation and active uses expected for its prominent location.

Some federal offices and services and businesses are currently located in the existing structures, but overall the complex is currently highly under-utilized.

Covered atrium in the core of Sinclair Centre in downtown Vancouver. (BGIS)

Covered atrium in the core of Sinclair Centre in downtown Vancouver. (BGIS)

“Today, the entire block and its heritage buildings offer great opportunity to address what is perceived by many to be a significant deficit of urban integration. The City of Vancouver surrounds this location in the international business district with high-end retail, a transportation hub, tourist cruise ship and conference facilities, and downtown office buildings,” reads the federal government’s rationale for the redevelopment.

“Sinclair Centre sits introvertedly in the midst of this all, and should instead become an integral part of urban activity. Of great relevance will be the design of appropriate pedestrian experience and suitable uses at the various ground planes. Of similar importance will be the scale, proportion and massing of any new structures added to the current heritage buildings. Lastly, given that the federal government intends to develop a significant downtown Vancouver presence, there is opportunity to demonstrate leadership and develop this property to show Vancouver and all its visitors that Canada is a leading place of innovation, sustainability, consideration and fairness.”

The federal government’s timeline for the Sinclair Centre redevelopment would complete the request for proposals process in 2022 for a potential private development partner in a public-private partnership. Detailed design and planning work would be conducted between 2022 and 2024, and construction would begin in 2024 for a completion in 2029.

This project has been in the making for some years now, after the federal government formally indicated their interest to Vancouver City Council in 2015 in adding an office tower at Sinclair Centre to consolidate federal offices and civil servants in Vancouver under one hub.

At the time, federal officials indicated the office tower as an addition to the heritage buildings would follow the municipal government’s mountain view cone height restrictions. This means an office tower rising from one of the city block’s quadrants, most likely on the north side, would have a maximum height of no more than 350 ft (107 metres), or about 29 storeys.

In early 2016, the federal government determined Sinclair Centre’s buildings required significant upgrades, and a redevelopment that adds an office tower and incorporates heritage restoration would be the best course to take.

As of 2020, the federal government has indicated the Sinclair Centre aligns with the City of Vancouver’s long-term plans to expand Waterfront Station into a world-class transportation hub — largely accomplished by a northward expansion over the railway — and the broad strategy of further densifying the city centre with more job space.

Existing condition and neighbouring developments near Sinclair Centre in downtown Vancouver. Click on the image for an enlarged version. (Government of Canada)

Artistic rendering of the transit concourse at Waterfront Station. (City of Vancouver)

There’s 750,000 sq ft of office being built in 3 new towers on the block south of Waterfront Station.

An existing tower at the NE corner will also see major retrofits.

On the city block immediately to the east of Sinclair Centre, three office towers are in various stages of construction, creating a combined total of 750,000 sq ft of office space immediately next to the region’s public transit hub.

Additionally, along with the Sinclair Centre project, the federal government has set aside funding to retain two other crown-owned office buildings in downtown Vancouver — the 1995-built office tower at Library Square and the 2002-built Douglas Jung office building.

This Sinclair Centre redevelopment is the federal government’s largest property move in the city centre since late 2012, when it sold the old Canada Post building block for about $160 million to British Columbia Investment Management Corporation — one of Canada’s largest pension funds, which later created QuadReal Property Group.

The federal government is also planning a major office hub in Surrey City Centre, next to SkyTrain’s Surrey Central Station, to establish its consolidated hub for South of Fraser communities in Metro Vancouver.