On Tour in July, many reminders for American golf fans to be thankful 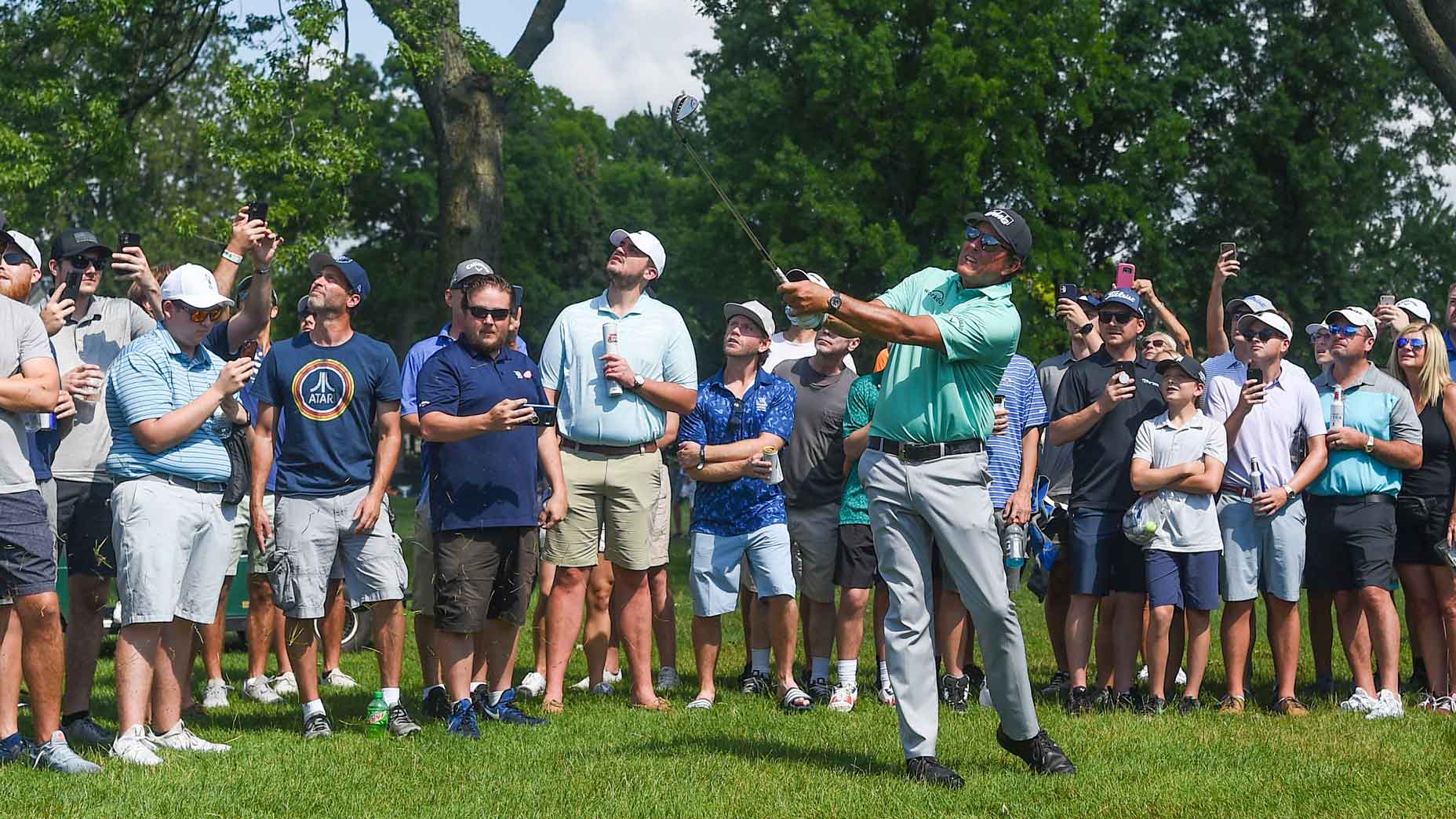 DETROIT — On Wednesday at the Rocket Mortgage Classic, when Tim Tucker was still caddying for Bryson DeChambeau, the two of them paced quickly, side-by-side down the range at Detroit Golf Club. Someone yelled something about Michelob Ultra (we can also assume they were a Brooks Koepka fan), but neither looked up. They were focused on their conversation first, and on the range second. It was pro-am day and not a single hitting station was open for the 6th-ranked player in the world.

All the way down they went, looking for a place to practice, and back again they came in retreat. Only once Dan Brudzinksi had finished his warmup did a space finally open. You know Dan, right? The guy with the navy blue Arcadia Bluffs visor? Exactly.

It was quite the sight, and Brudzinksi made sure to snap a photo for his friends. “It’s not every day that Bryson DeChambeau fills in your spot on the driving range,” he said with a chuckle. Welcome to late-stage Covid Golf Events in America — now, complete with pro-ams! Oh, how far we’ve come in 12 months.

This time last year, the PGA Tour was playing its fourth event back from its hiatus and things were weird. No fans, just volunteers and some golf writers. No sound, just distant tee shots and the humming of generators. There were ropes up along the holes and signage fences surrounded the back nine, which was odd. Fast-forward to Wednesday where spectators poured onto the grounds, which have been pummeled by storms all week. They were armed and ready, with umbrellas and waterproof shoes. “Hey, at least we’re here this year,” one dad said to his son after their tickets were scanned.

Through one strictly domestic lens, this all feels normal. Spectators have been attending Tour events for more than nine months now. At Kiawah Island, they became part of the story. Part of history, really, during a pandemic. There’s a worthy reminder there, and in the action this weekend at DGC. These times feel normal, but only because they’re here, in the United States. We should be thankful for how normal life is right now. It isn’t everywhere else.

We can obviously look to our Canadian friends from the north, where recreational golf was banned for a full month this spring due to Covid restrictions. Detroit is plenty close to Toronto, and the golf life has been good for months in Wayne County. The biggest concern at the Rocket Mortgage Classic this week was keeping the food refrigerated after the club lost power Tuesday night. Local pro-am contestants need only prove they are vaccinated or Covid-negative to enter the PGA Tour’s “bubble.” Soon they were yukking it up with caddies in player dining.

Recall the spectrum of responses to news about vaccines being given at the Memorial Tournament.

When it was announced that Jack’s event would offer shots at Muirfield Village for three days of the tournament, you had just as many Americans calling this move “desperate” as you had non-Americans applauding the idea and wondering if such a surplus of vaccines will ever exist everywhere. That surplus remains an incredible achievement, just 15 months after the 2020 Players Championship was canceled.

Moving forward on Tour, we will be dealt some reminders that life isn’t this normal elsewhere. The more-transmissible Delta variant of the coronavirus is causing a spike of cases in England, which has forced the country to impose strict quarantines for all visitors — golfers, caddies and journalists included. Players cannot bring a team of 10 over to Royal St. George’s like they normally might. Just four people to a house this year. And approved housing at that. No eating out, and definitely no contact with anyone who has tested positive. Otherwise, contact tracing rules could force a player to withdraw, even with a negative test. Necessary or not, the R&A is not messing around. As a result, there were grumblings on that same Detroit Golf Club driving range this week. While no players have officially bailed for that reason, some have certainly thought about skipping the Open altogether. It’s just so much easier to stay here in the land of the free, the home of the brave, and a vaccinated majority.

At the Olympics, which will take place just two weeks later, the situation is even less rosy. Japan has vaccinated its residents at a much slower pace than other nations — less than 20% of the population is fully vaccinated — and is welcoming athletes, coaches and journalists from all over the globe. But not without a strict quarantine, in which visitors are restricted on where they can eat, where they can walk, where they can exist for their first 14 days in the host country. Visitors from countries with spiking case counts will be met by an even more intense quarantine upon arrival.

As it currently stands, golfers competing in the Olympics will not be able to attend other sporting events. They will not be accompanied by family who aren’t their coaches (Justin Thomas and Xander Schauffele, how lucky!). They will be spending a lot of time in their middle class hotel rooms and will be forced to crush Netflix and practice putting on carpets. Oh, and get tested for the virus every single day, regardless of vaccination status. If that all feels like a lot, well then maybe you can understand the thinking of the slew of pros who decided not to go.

Back in Detroit, Rory Sabbatini poses for a selfie with a young fan. Jason Day is stopped for a pic with two range attendants. Barry Sanders chunks an iron from the 18th fairway and Phil Mickelson laughs along with a spectator who was dressed exactly like him. Life here, right now, is different than many other places. We can pause for a moment to appreciate it.