Mayor raises a bottle of real ale to the Duke of Edinburgh and challenges local bigwigs to do the same – MKFM 106.3FM 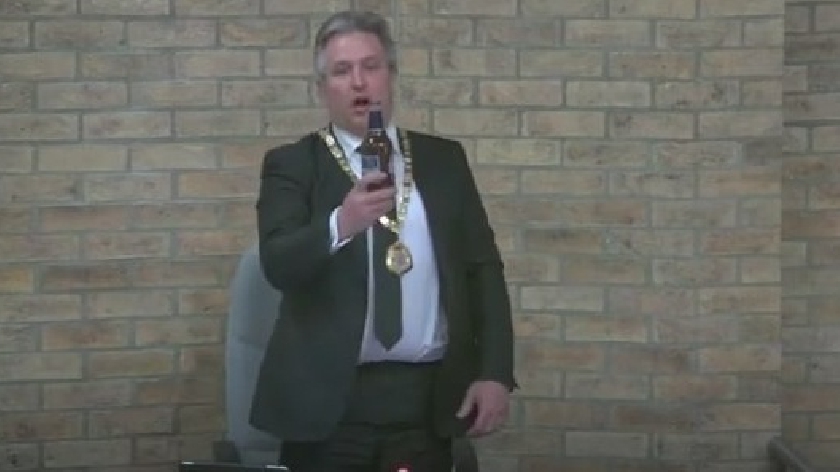 Pubs in the borough are set to receive a visit from members of the civic ‘chain gang’ after the Mayor of Milton Keynes set them a cheeky challenge in memory of the Duke of Edinburgh.

Cllr Andrew Geary (Cons, Newport North & Hanslope) charged chain-wearing dignitaries including the Lord Lieutenant, the High Sheriff and Deputy Lieutenants to visit pubs to boost their businesses – and to win a gallon of real ale.

Wearing a black suit and tie, as well as his own chain of office, as a mark of respect to the Duke, whose funeral is on Saturday, Cllr Geary rose at the end of a meeting on Tuesday clutching a bottle of real ale from Bow Brickhill-based Hornes Brewery.

Speaking at a virtual reception for local businesses with a picture of the Queen behind him in the council chamber, Cllr Geary said he had heard on good authority that the Duke would often replace wine and Champagne with traditionally brewed beer.

Addressing the dignitaries he challenged them at “some point next week” to go to a hostelry, buy a pint and raise a glass, have a picture taken and send it to the mayor’s office.

The winner will get one gallon of real ale from Hornes Brewery.

Cllr Geary confessed however that he is “not a big real ale drinker” but his wife is!

And he is looking forward to seeing pictures of Lord Lieutenant Lady Howe, her deputy Dr Ann Limb and High Sheriff George Anson out and about.

The meeting also held a moment of reflection for the Duke, who died at the age of 99 on April 9.

Mayor Geary recalled how he had been in a line up of dignitaries to meet the Prince at the Ramada hotel at the opening of Stadium:MK in 2008.

Cllr Geary, the then Tory group leader, was next to the deceased Labour leader, Cllr Kevin Wilson.

“The Duke asked: “You’re Conservative and you are Labour, who’s in charge?,” said Cllr Geary.

“To which he turned round and said “hung, I thought that’s what you lot did to each other.

“Just one humorous story of the Duke, and I am sure people will think of plenty more that we’ve had as we honour and give thanks for the life of a Prince, of a figurehead, of a treasured member of the Royal Family.”