Jim Herman back to defend title at Barbasol Championship 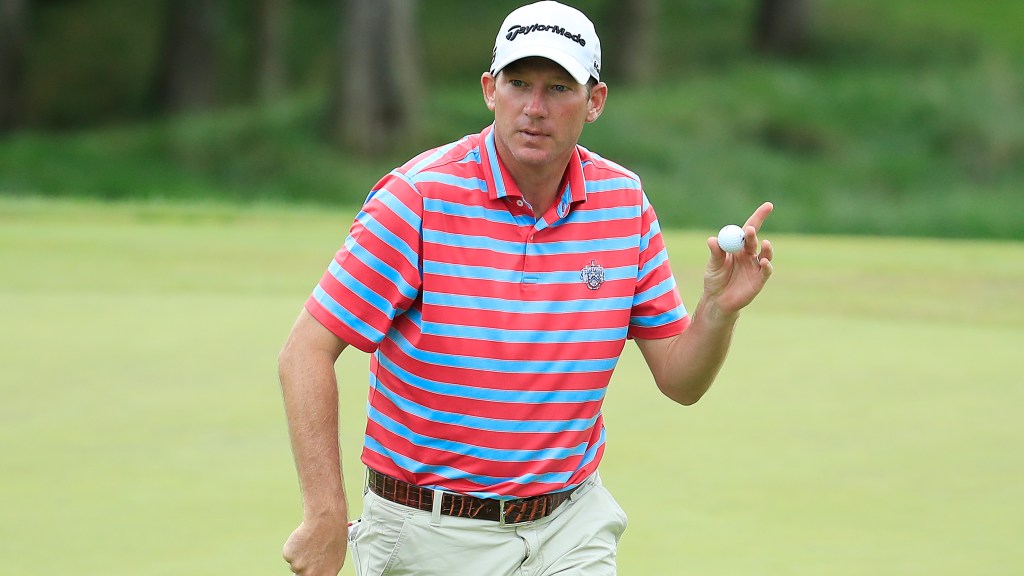 Just in time to play the delayed role of defending champion, Jim Herman seems to have found his golf game.

After a rough patch earlier this year, one in which he missed the cut eight times in 10 tournaments, the Cincinnati native has finished in the top 30 in each of his last three events, including a T-28 at last weekend’s John Deere Classic in Silvis, Illinois.

And now Herman heads back to Keene Trace Golf Club in Nicholasville, Kentucky, just on the outskirts of Lexington. Two years ago, Herman hoisted the trophy after the Barbasol Championship, using a scintillating 62 in the third round en route to the win.

Since this event was cut from the PGA Tour schedule a year ago, Herman has had an extra 12 months to enjoy his reign over a tournament that’s just about an hour from his boyhood home.

As for defending, he’d love to put a new rule in effect for past champs.

“I wish you could start off with a little head start. If they’d give that to
you, I’d definitely take it,” he said. “It’s hard to get back into that mode where you were on that Sunday. We hit all these golf balls, we do all the practice to put ourselves in this position where we’re in the final groups on the weekend. There’s a lot that goes into it and just to say that you could just walk into a
course where you’ve won that following year and assume you’re going to be in the mix is very naive of myself or anyone else.

“Just trying to have some carryover of my form from the last couple weeks and … draw from the emotion and the positive vibes that I did have from two years ago here and see if we can build on that.”

For Herman, the key in recent weeks has been his putter, which has moved him back into contention for the FedEx Cup playoffs. Herman currently sits at 174th (the top 125 reach the playoffs in August), but he’ll need a big showing in the Barbasol and in upcoming weeks to qualify.

Herman said in advance of this week’s title defense that his driver has been clicking, yet the putter is perhaps the biggest key. Even with recent strong showings, he still sits 169th on Tour in Strokes Gained: Putting.

But with soft conditions, he’s expecting another low number will capture the big prize.

“I think we’re going to have some low scores again. I don’t know if it will be 26 under like two years ago, but you’re going to just have to go low. The course is in good shape, but wet,” Herman said. “The greens are putting really well, but they’re soft. We’re going to be throwing darts all week. If the fans like birdies, we’re going to be making them this week.”

The opposite-field event is certainly ripe for the taking. With most of the world’s best players off at the British Open, Herman has as good a chance as any against the likes of Charl Schwartzel, Seamus Power, Russell Knox, Richy Werenski and Patrick Rodgers.

And if it doesn’t work out he’ll simply wait for his next chance to defend a crown — at the Wyndham Championship in early August. His only previous Tour victory came in 2016 at the Houston Open.

“With Wyndham coming up in about three or four weeks, there’s a lot of positive energy in my camp. All my friends and family, a lot of people looking forward to this event coming down from Cincinnati here in Lexington,” he said. “Then look forward to Memphis, playing Memphis in a couple weeks, and then getting back out to defending at Wyndham. Great tournament there, had a great weekend at Wyndham last year.

“Winning three times obviously it’s been way exceeding my overall expectations, but it’s been a pleasure being the champion three times in three great events.”