How New Forest eateries have been reinvented as lockdown shops 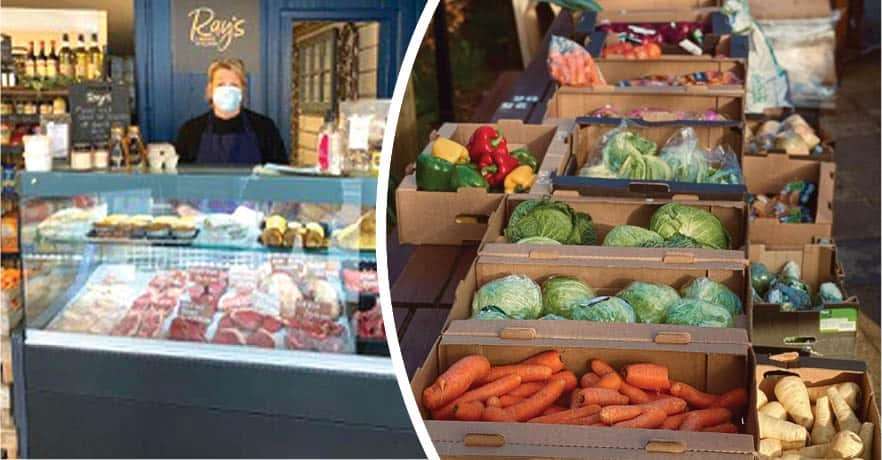 NEW Forest eateries forced to close by the pandemic have been transforming themselves into local produce stores to help them and their communities get through the latest lockdown.

Among those launching recently were the White Horse pub’s Village Supplies in Netley Marsh and Ray’s Kitchen Larder in Milford. Both offer customers an alternative to the major supermarket chains for their weekly food shop.

White Horse proprietor Paul Hingston dreamt up his scheme and brought it to fruition within four days after the hostelry in Ringwood Road was once again forced to shut from Boxing Day.

The impact has forced all nine of the family-run business’s staff to be placed on furlough, with thousands of pounds of beer and food having to be thrown away.

But the pub is fighting back with a large outdoor covered patio now boasting stalls offering fresh food such as meat, cheeses, jams and pickles, bread and cakes from local suppliers including the New Forest Jam Company, Lyburn Cheese in Landford, and Owton’s butchers in Southampton.

Speaking to the A&T, Paul explained the idea was to provide a facility much like the traditional village stores that served the local community in the past.

“I hadn’t done anything previously, but this one now is becoming quite a long and dragged out lockdown, with the rumour mill now saying we may not be able to reopen until 3rd May,” he said.

“Literally, once I heard the pub could be shut down till May – and obviously I was getting very bored at home – I started thinking of [the produce store].

“The great thing is that it’s outdoors. People are worrying about going to the supermarkets at the moment, but with this they don’t need to go inside the building.”

Although it started off operating on Fridays and Saturdays from 9am-1pm, the store’s hours could be extended if demand grows.

Running it with co-proprietor daughter Sophie Hingston, Paul enjoyed a successful first day’s trading with around 50 shoppers within the first couple of hours, plus messages of support from customers, including the pub’s loyal regulars.

Covid-secure measures are in place, with a limited number of people allowed at the stall at a time, social distancing, sanitisation points and face coverings required.

Paul, who has run the pub for nearly seven years, quickly adapted to his new role of stallholder and is considering retaining a small village stores facility by the bar once it reopens.

“It’s quite easy,” he said. “I sourced local suppliers and had it delivered. I’ve had excellent support from my suppliers.”

Meanwhile, on the other side of the New Forest in Milford, Stacey Crouch, who opened Ray’s Italian Kitchen in High Street in December 2018, first thought of the produce store conversion last November before setting it up within a week.

Operating as Ray’s Kitchen Larder, it offers restaurant-quality ready-made meals for people to reheat at home. Some of these are available in-store, but a wider selection is made to order.

Stacey told the A&T: “I said to myself that if we have another lockdown like last March, I need to do something more because I have overheads and there’s also my mental health to think about as I can’t just be doing nothing.”

She continued: “Friday was really good. I only announced the launch on the Wednesday, but a lot of people came to see what I was doing. They said it was amazing. Some said they had already done their weekly food shop but they would certainly come back next week.”

Ray’s Kitchen Larder’s Covid-secure measures include only two customers allowed inside at once, face coverings required, social distancing and hand sanitiser on entry.

Stacey said the lockdowns had been tough for the restaurant, with staff – most of whom are students – placed on furlough.

Praising her employees for pulling together to meet the challenges of last summer’s reopening, she believed this helped the business survive the next lockdown despite limited takeaway orders.

Run in collaboration with Christchurch-based procurer and supplier Meadowbrook Produce, the store is open Tuesday to Friday from 9am-3pm, and from 9am-1.30pm on Saturdays.

Free local deliveries are available on orders of £30 and over on Tuesdays, Thursdays and Saturdays.