How Hotels Are Adapting and Innovating During COVID-19 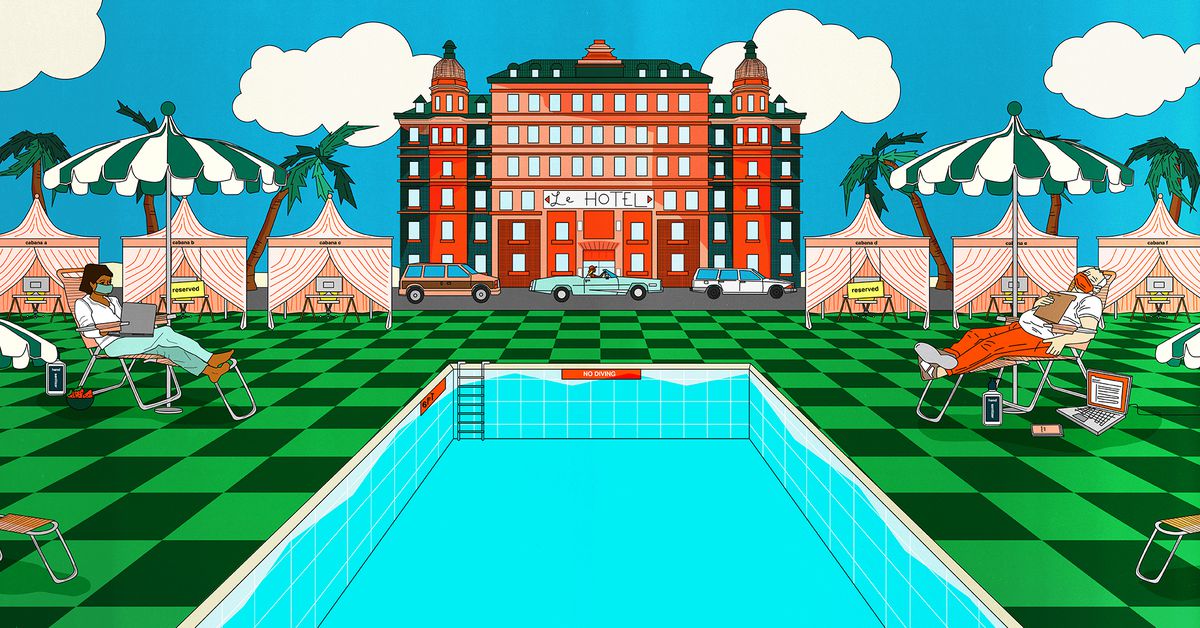 The new Hotel June, located in the beachside Playa Vista neighborhood of Los Angeles, was set to open last spring. With 250 guestrooms, two restaurants, a pool, and tons of outdoor communal space, it was poised to be a hip, lively, and relatively affordable option for guests visiting LA’s west side. It was also the introduction of a completely new brand from Proper Hospitality, already known for its namesake upscale properties in cities like San Francisco and Austin. Of course, none of this happened as planned.

Like restaurants, the hotel industry has been hard hit by COVID-19. Large hotel chains have recently reported massive losses — Hyatt lost $703 million in 2020; Hilton said its losses totaled $720 million and triggered permanent cost-cutting measures. A November survey from the American Hotel & Lodging Association found that more than 60 percent of hotels were operating with less than half of their full staff. As of early November, the occupancy rate at hotels in large urban centers was 34 percent, down from nearly 80 percent a year prior. It’s no wonder. A hotel stay these days — with all the plexiglass, masks, sanitizer, plastic-wrapped remotes, and lack of housekeeping ( though some hotels will provide sheets and towels for you to change yourself) — doesn’t exactly scream “vacation.” And the loss of business has led hotels to get creative with what they’re offering beyond a bed, with a slate of perk packages that, at times, feel like a consolation prize for putting up with the realities of hotel stays in a pandemic.

Hotel June ended up opening in June 2020 after LA lifted some initial COVID restrictions. “One nice thing about launching a hotel brand during COVID, as opposed to it already being open prior, is that we got to literally completely rethink and reassess every element of how we wanted the hotel to operate with the pandemic in mind,” says Brian De Lowe, president and co-founder of Proper Hospitality. And, of course, figure out a way to operate that could withstand far less business than initially planned.

Instead of courting out-of-towners, who in normal times would make up three-quarters of hotel guests, Hotel June introduced partnerships to appeal to its neighbors: rooms for rent during the day, day-rate packages that included outdoor workouts and passes to the pool. “We doubled down on the staycation and daycation packages, and made sure that even if people weren’t coming to spend the night, they were able to benefit from an experience they want to have away from their home,” says De Lowe.

A year into pandemic living, just about any experience away from home is a welcome one, even if it comes at a cost. Plenty of hotels have brought back the day rate, repurposing overnight guest rooms into workspaces for daily use, often with quirky and attention-grabbing perks attached. At the Innside (stylized INNSiDE) by Meliá in New York, guests can bring their dog for the day, or even overnight, and get access to in-room perks like dog beds and pet-friendly throw blankets. The hotel’s “day stay” was introduced late last year and updated recently to accommodate animals. Pets can join their humans for dinner outdoors on the heated patio and now even have access to their own menu. For $55, dogs can choose between salmon or grilled chicken with steamed veggies, lemon, and dessert. An extra $3 scores a chef-made peanut butter dog biscuit.

As Jeff Hong packed to move out of his Brooklyn apartment over the summer, he and his girlfriend decided to make a mini-vacation out of it. The pair stayed at 50 Bowery, a boutique hotel in New York’s Chinatown owned by Hyatt. For two weeks they played tourist in Manhattan, enjoying a suite with a view of the Brooklyn Bridge for less than $100 per night. Hong says he wasn’t particularly loyal to any hotel chain, and he paid in cash, not points. The rate was too good to pass up, he says, but the experience was great, too. “They gave us a bunch of credit to use at their rooftop bar because it was all outside up there, so you could get snacks and treats,” he says. The hotel paused its typical room service, but offered takeout from its upstairs restaurant, the Crown, and partnered with a few restaurants in the neighborhood to offer free breakfast, up to a certain dollar amount. “Because their restaurant was operating on limited hours, they outsourced breakfast to local diners,” says Hong. “Honestly, it was fantastic.” The biggest surprise, he says, was the number of out-of-town tourists in the hotel who were taking advantage of cheap COVID rates to visit New York for the first time.

But there’s one new client making an even bigger impression: the work-from-hotel set. Resorts by the beach offer Wi-Fi-enabled cabanas for remote work. Guests traveling with their school-age kids at Pittsburgh’s Hotel Monaco, a Kimpton property, can sign them up for a remote learning package that includes a desk, school supplies, a bagged lunch, and treats like mini-Oreos and fruit snacks. For an additional $75, parents can book an adjoining room for the day, giving kids and parents enough space to work — separately. The package comes with the help of a chief virtual learning officer tasked with getting kids set up at a desk with working Wi-Fi for the school day. In this case, it’s Hotel Monaco sales and marketing director Greg Goffin. He says a handful of families have taken advantage of the offering so far. “I give the parents a password that is their child’s name for the Wi-Fi. The kids go crazy when they find out their first name is the password,” he says. But really, “The snacks are the big thing.”

So is outdoor space. Hotels lucky enough to have open-air features are making sure prospective guests know about them. Margot Kong owns Journeys Unparalleled, a luxe travel consultancy that caters to family travel. Marketing is different now, she says. Hotels and resorts are promoting rooms with outdoor spaces and standalone options like cottages, villas, and casitas. “At the very least, people are asking for an exterior entrance,” she says. “Things like outdoor space and private gardens and separate entrances are really important to people.”

Some hotels in milder climates have repurposed their outdoor spaces, moving things like spa services and other gatherings outside. Frequently guests can book socially distanced time by the pool. In California’s wine country over the summer, local traveler Allison Ball and her husband were assigned two poolside loungers for the duration of their visit. “Since everyone had assigned seats at the pool, it made it really easy to space out and leave a towel without worry,” she says. “The manager did an awesome job of taking care of us, especially poolside. He gave us a little tour, explained their policies, and really went above and beyond talking through the changes they put in place and such. That in itself was definitely more thorough than a normal check-in experience.”

It’s not all big, flashy packages that move the needle during COVID, either. During a recent visit to Five Pines Lodge in Sisters, Oregon, Marzia Della Corte was happy to receive a breakfast box specifically catered to her plant-based diet needs. But maybe more exciting was one trash can liner for each day of her stay. “We could simply leave the trash outside the door and it would magically disappear,” she says. “Not being able to have room cleaning, having at least the ability to throw out the trash that easily made it very helpful.” Daily trash pickup wasn’t common at other places she’s stayed over the past year, she says.

Even though it has seen signs of early success, Hotel June is not immune to the challenges all hotels are facing. It’s still not fully staffed and today counts its employees in the tens, not hundreds. De Lowe says that properties in his company’s portfolio have seen revenues drop anywhere from 50 to 100 percent, depending on local restrictions. Still, he says the team that remains is working harder than ever to keep up with changing regulations and tweaking concepts to make the business work.

But the important thing, hoteliers say, is that these changes are temporary. COVID, it seems, is widely considered a short-term problem by the hotel industry. They’re not undertaking major renovations or other permanent changes with long-term pandemic life in mind. The pandemic has sped up the introduction of new technology like contactless check-in and keyless room entry, but most say those changes were already in the pipeline. Proper Hospitality has several new projects still in the works, and, according to De Lowe, “We’re not designing for COVID at all. I think by the time any hotel being designed today actually opens, the pandemic better be completely behind us — or we have bigger problems.”

Kristen Hawley writes about restaurant operations, technology, and the future of the business from San Francisco.

Carolyn Figel is a freelance artist living in Brooklyn.

The freshest news from the food world every day