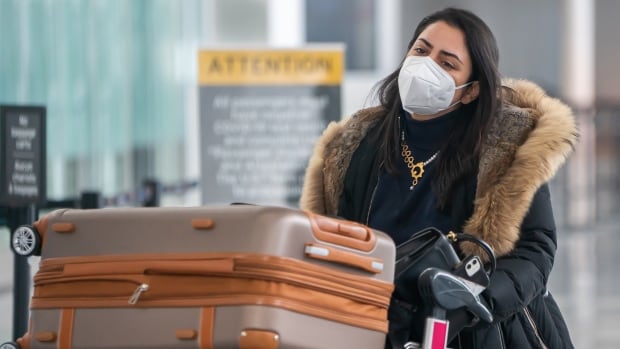 Air travellers landing in Canada will have to quarantine in a hotel, at their own expense, starting Feb. 22, Prime Minister Justin Trudeau announced Friday, as the federal government tries to curb the spread of the new, more transmissible variants of the COVID-19 virus.

The enforcement date comes two weeks after the federal government said air travellers returning from non-essential trips abroad will have to isolate in a federally mandated facility for up to 72 hours while they await the results of a polymerase chain reaction test, commonly known as a PCR test.

Trudeau said the measures are in place to keep Canadians safe, particularly given the threat of the emerging variants.

“We’re trying to keep people safe and keeping Canadians safe from the viruses and discouraging all nonessential travel and ensuring that if people do have to travel, they’re doing the things that we can be certain are going to prevent the virus from spreading,” he told reporters outside Rideau Cottage Friday.

“We’re aware that that we need to be thoughtful and compassionate about people who are in extremely difficult situations and absolutely need to travel. We’re not trying to punish people.”

Health Minister Patty Hajdu said travellers will need to book a hotel in the city in which they first arrive in Canada, either Vancouver, Calgary, Toronto or Montreal. Hotel booking information will be available online as of Thursday.

Those with a negative result on their arrival test will be able to take a connecting flight to their final destination.

“Costs of these hotel stays may vary slightly at each location. It is up to the traveller to choose where they wish to stay and book in advance of departure,” said Hajdu.

“The price will include costs associated with the room, food, cleaning, infection prevention and control measures, and security as well as transportation.”

Trudeau has estimated the potential cost of the three-day quarantine hotel stay at $2,000.

Those who test positive will be moved to a designated quarantine facility as the government monitors new variants of the coronavirus.

Hajdu says vaccinated Canadians will not be exempt.

The testing requirement is in addition to the mandatory 14-day quarantine period for returning non-essential travellers. The government has had travel restrictions on most foreign nationals in place since March 2020.

Earlier this week, the prime minister announced that as of Feb. 15, non-essential travellers entering Canada through the land border will soon need to provide proof of a negative COVID-19 test within 72 hours of arriving. Essential workers, such as truckers, emergency service providers, and those in cross-border communities, will be exempt from this requirement.

On Friday, officials clarified that land travellers can also provide proof of a positive test taken 14 to 90 days prior to arrival.

Trudeau has said officers can’t legally deny entry to Canadians, but those who show up without proof of a test could face fines of up to $3,000.

Starting Feb. 22, travellers entering Canada at the land border will also be required to take a COVID-19 molecular test on arrival as well as toward the end of their 14-day quarantine.

Five land ports of entry will have onsite testing as of Feb.22. They are:

An additional eleven ports of entry will with onsite testing as of March 4:

The government said it is working to supply all other ports of entry with test kits for travellers to take to meet these requirements.

Public Safety Minister Bill Blair said all travellers, whether arriving by land or air, will also be required to submit their travel and contact information, including their quarantine plan, electronically through the ArriveCAN app, before crossing the border or boarding a flight.

Conservative health critic Michelle Rempel Garner said Conservatives agree that it isn’t the time for international leisure travel, but said there are many Canadians who should be granted exemptions to the hotel rule.

“The fact is many Canadians have essential reasons for travel. Those travelling to reunite with a spouse, an ailing relative or to access medical treatment should not be faced with what is an insurmountable barrier for many in these situations. Your government recognized this principle when you made an exemption for athletes, citing affordability concerns,” she wrote in an open letter to Hajdu on Thursday.

Earlier this week, news emerged that the federal government has agreed to offer 750 Olympic and Paralympic athletes — along with members of their support staff — exemptions from some quarantine-related travel restrictions in the lead-up to the Olympics.

“It is shameful to saddle those who must travel to support family and loved ones abroad affected by end-of-life or medical emergencies with a $2,000 bill. People who are travelling for this purpose should be allowed to quarantine at home, in compliance with pre- and post-arrival testing requirements,” she wrote.

“As well, persons with work visas, international students, and missionaries deserve an opportunity to be consulted to develop a more sustainable solution than the lack of information and clarity that you have provided.”