Explained: Amid Covid-19, the extent of the oxygen crisis in India, and solutions 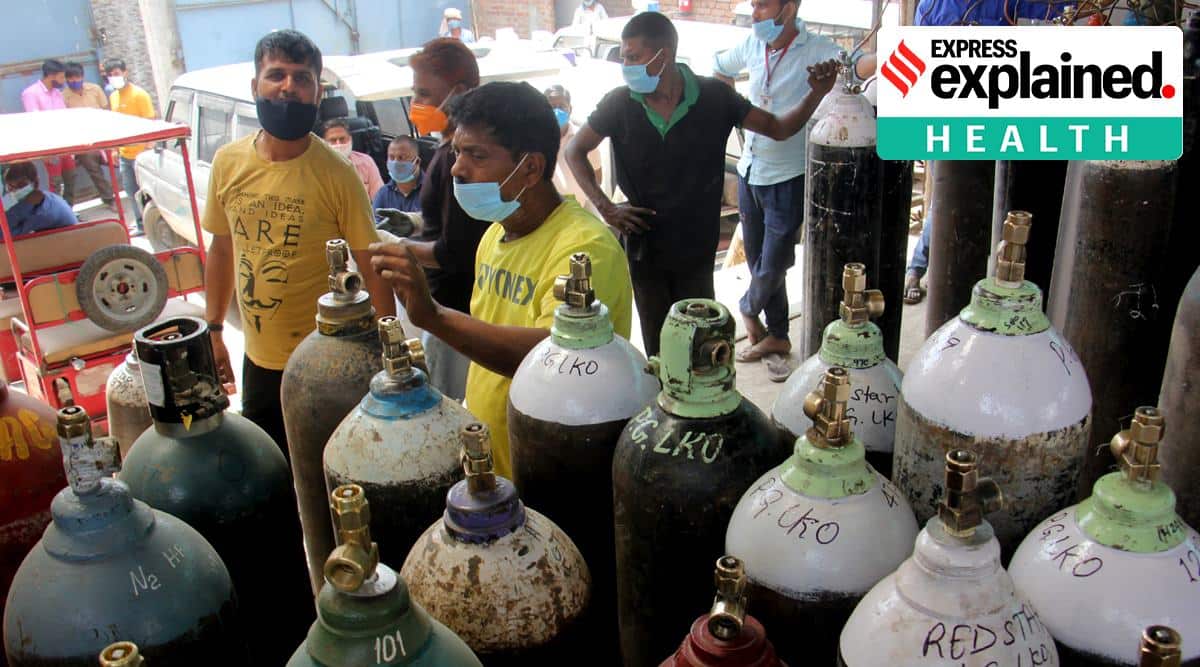 As India touches 16 lakh active Covid-19 infections, a number of states have reported shortages of medical oxygen for a growing pool of patients in need of oxygen support. India plans to import 50,000 metric tonnes of medical oxygen to cater to the rising demand. The Ministry of Health and Family Welfare has been directed to float a tender for the import.

Which states are the worst hit?

Consumption of medical oxygen in Maharashtra has reached the state’s full production capacity of 1,250 tonnes. The state has 6.38 lakh active cases of Covid-19, and about 10% of them — an estimated 60,000-65,000 — are on oxygen support, the highest for any state. Maharashtra is additionally taking 50 tonnes from Chhattisgarh and another 50 tonnes from Gujarat daily. It is also slated to receive 100 tonnes from Reliance’s plant in Jamnagar, Gujarat.

Madhya Pradesh, with 59,193 active patients as on April 16, requires 250 tonnes daily. The state does not have its own manufacturing plant and relies on Gujarat, Chhattisgarh, and Uttar Pradesh for oxygen supply. As cases rise in neighbouring states, MP is staring at the possibility of supplies from there running out. Gujarat’s requirement has crossed 500 tonnes per day for over 49,737 active Covid-19 cases.

The Centre-appointed Empowered Group-2, formed to monitor the supply of essential medical equipment during the pandemic, has been focusing on 12 high-burden states — Maharashtra, MP, Gujarat, Rajasthan Karnataka, UP, Delhi, Chhattisgarh, Kerala, Tamil Nadu, Punjab and Haryana — where oxygen requirement is set to shoot in the coming days. Over 17,000 tonnes of oxygen will be directed in three batches from states that have surplus oxygen to these 12 states to meet their projected demand.

The problem is acute in rural areas, which are going through a rise in Covid-19 cases but have no large storage tankers, and in smaller nursing homes, which rely on daily supply of oxygen cylinders.

How much oxygen is produced, where, and what are the constraints on supply?

Oxygen has applications in the iron and steel industry, hospitals, pharmaceutical units that manufacture vials, and the glass industry. Currently, most states have diverted their entire oxygen production for medical use.

Industry experts said India has the capacity to produce more than 7,000 metric tonnes of medical oxygen. The major manufacturers are Inox Air Products, Linde India, Goyal MG Gases Pvt Ltd, National Oxygen Limited. The largest of these, Inox, produces 2000 tonnes per day. “We are currently contributing to 60% of the total medical oxygen requirement in country. We have stopped nitrogen and argon gas production and diverted all resources for oxygen production,” an Inox official said.

During the first wave of the pandemic last year, smaller manufacturers that produced industrial oxygen, too, were allowed to produce medical oxygen by changing certain specifications. This has helped expand the medical oxygen production capacity.

Manufacturers prepare liquid oxygen with 99.5% purity, which is stored in jumbo tankers, and transported to distributors in cryogenic tankers at a specified temperature. At distributor level, a process of regasification is followed to convert the oxygen into gaseous form and fill it in jumbo cylinders and dura cylinders. These cylinders then go to smaller suppliers or directly to hospitals. “The problem is demand is high, but there are not enough cylinders and tankers to store and transport oxygen,” an industry expert said.

It is not possible to immediately set up new oxygen manufacturing plants or expand existing ones. In the last one year, Inox started two plants in West Bengal and UP to produce 200 and 150 tonnes oxygen respectively per day. The process of installing one plant took 24 months. An Inox official said they have plans for more plants in MP, UP, Tamil Nadu and West Bengal, but it will not the solve immediate crisis.

What are the hurdles in transportation?

India does not have enough cryogenic tankers to ensure 24×7 road transport of medical oxygen. Now when oxygen is being transported from one state to another, the travel time it takes from the manufacturer to a patient’s bed has increased from 3-5 days to 6-8 days. The smaller a hospital or the more remote its location, the longer the time taken for the oxygen to reach there.

Smaller suppliers have also complained they do not have enough jumbo and dura cylinders to keep the flow steady.

The increase in cost for transport and logistics has increased the cost of refilling cylinders. A cylinder that would earlier cost Rs 100-150 for refiling, now costs Rs 500-2000.

What is the way forward?

Usually, 20 out of every 100 patients turn symptomatic and three of them critical. The pool that may require oxygen varies from 10-15 per 100 patients. Among solutions that are being worked out or proposed:

The Empowered Group plans to identify 100 hospitals in far-flung areas to install pressure swing absorption (PSA) plants, which can manufacture their own oxygen and make the hospitals self-reliant. This will cut transportation costs and delays in oxygen supply to remote parts. Another 162 PSA plants are in the process of completion.

Hospitals are setting up huge storage tanks to store supplies that can last at least 10 days. In the last one year, several civil hospitals have set up such jumbo tankers to avoid their daily wait for cylinders.

Industry experts in MP said they plan to use trains to transport oxygen faster instead of solely depending on traditional road transport. Maharashtra Chief Minister Uddhav Thackeray has suggested airlift of oxygen supply from one state to another.

Surplus oxygen stocks from iron and steel plants have been diverted for medical use. The Empowered Group-2 has also decided that argon and nitrogen tankers be diverted for oxygen transport. For this, the Petroleum and Safety Organisation has issued orders. The Group has also advised use of industrial cylinders for refilling.

The Health Ministry has repeatedly warned against oxygen wastage and unnecessary use. Industrial experts have raised concerns over possible leakages in hospital pipelines that supply oxygen. Last year, an expert committee under the Health Ministry fixed oxygen supply to 40 litres in intensive care units and 15 litres in normal wards per patient per minute. It has advised monitoring of patients on oxygen support daily, and that only those with oxygen saturation levels below 94% be put on oxygen support.