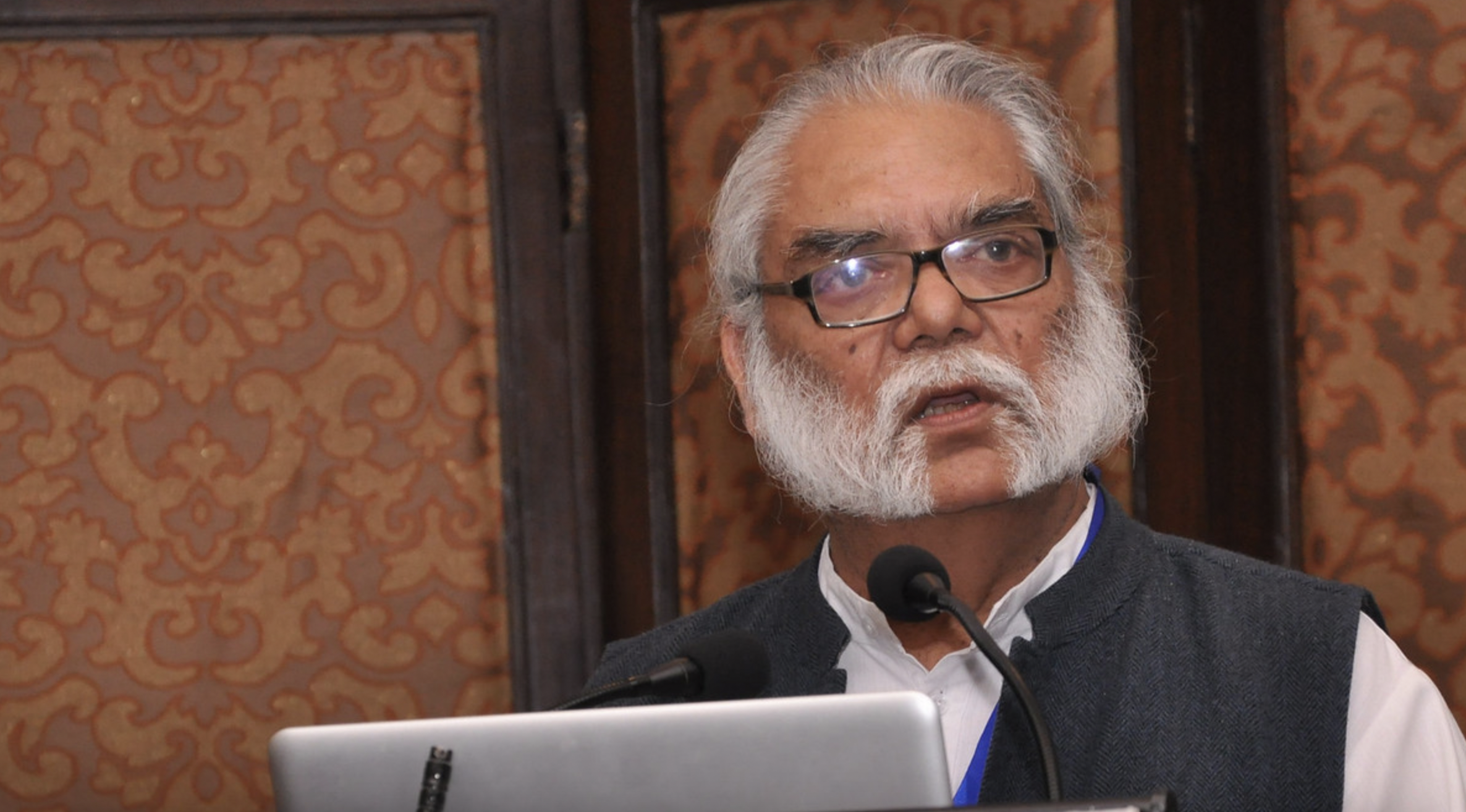 Dinesh Mohan at a lecture in February 2015. Photo: TERI

‘Contrarian’ is the word that came to my mind when I first met Dinesh Mohan more than three decades back. We were introduced in the faculty lunch club soon after I joined IIT Delhi. After a hearty welcome he unleashed a barrage of questions, with genuine curiosity, about the research on computer vision which was my subject. Later would come the provocative comments, on the social relevance of such research, on the potential evil of such technology (e.g. as used in missiles during the Gulf war), and on how, beyond the elegant geometry and estimation theory of my discipline, lay deeper ethical concerns. The gruff tone did make me defensive and even irritated, yet the friendliness and lack of aggression that made me engage with it all.

He was a very well read man, and our discussions were highly enriching. For the next 30 years of our association , our discussions – and arguments continued over coffee and weekend drinks in the pubs around IIT Delhi – on all sorts of matters related to technology, science, education, policy, governments, politics and society – and of late COVID-19. They continued till just about a month back, when Dinesh Mohan fell prey to the wretched disease.

As may be expected, his flamboyance and outspokenness raised hackles in the staid environment of IIT Delhi, and universal popularity was something he neither sought nor got.

Dinesh was not shy of his politics. His contrarian views and advocacy stemmed from his imagination of an egalitarian society. His research on transportation and injury prevention were original and of far reaching impact. If ever our cities manage to have open spaces, decongested footpaths with space for hawkers street-vendors and pedestrians, if ever we have dedicated lanes for cyclists, safe traffic, affordable public transport, then due credit must go to the early conceptions by Dinesh. For it was he who articulated a pedestrian- and cyclist-first approach. Not that he was a Luddite opposing cars, but his was a rational and principled reservation on elevated highways passing through cities at the cost of the city’s pedestrians, cyclists, on private cars hogging public space.

Many of his simpler yet intriguing research questions were supported by orthodox engineering methodology. For example, when he along with his team members conclusively established that the vulnerable looking three-wheeler autorickshaws were actually amazingly stable contraptions, or that their presence on city roads slowed down traffic and thereby prevented accidents, or that helmets and seat-belts provided a huge level of protection against injury, he used rigorous engineering analysis.

On the other, hand some of his other, more extraordinary claims, on complex policy questions – for example, the utility of metro rail systems in Indian cities, or on the use of compressed natural gas (CNG) in public transport, or on the Bus Rapid Transit (BRT) system – certainly left room for doubt. On all these issues, he was fiercely argumentative and provocative.

Dinesh clearly preferred ‘low cost’ solutions, and this made him vehemently oppose the metro rail system in Delhi. He argued that the system will be prohibitively expensive and will have to be forever subsidised; that the construction process will be extraordinarily polluting which will offset possible post-construction lessening of pollution; that the reduction in congestion was likely to be short-lived because the requirement of a strong feeder system will not permit reduction of the number of buses, and any freed up space will only be occupied by more cars in an aspirational society. He also alluded to undesirable side-effects, like unrealistically elevated property prices along metro routes.

Dinesh believed that the high cost of engine conversions and the requirements of specially designed closed-loop catalytic converters will make CNG in public transport unviable in the long run, and pollution benefits if any will only be marginal. He argued that diesel engines are more mainstream and are likely to see more significant improvements in pollution reduction through research, and the real benefits in pollution control should come from quickly making public transport more convenient and popular, thereby reducing the number of private cars and congestion on the roads. He rooted for low-floor air-conditioned diesel buses and argued that additional pollution if any can be offset by the larger number of people they may carry.

Dinesh fiercely opposed the lockdown of March 2020 and was absolutely dismayed by the humanitarian crisis it caused. But this made him underestimate COVID-19 and he would sometimes say that the COVID-19 problem was more imagined than real, and that there was no evidence of any large scale distress due to the disease, at least in India. He appeared to be in favour of a let-the-disease-play-out model like in Sweden.

Of course, many of these contrarian arguments had tremendous merit, but as a conservative computer scientist I was trained to be sceptical of any claim not supported by a theorem, and of arguments that claimed legitimacy by plotting graphs based on data, which was not easy to verify. So I and several others, contested his views. The number of cups of coffee that must have been downed by people in the IIT Delhi coffee shops listening to Dinesh passionately argue against the metro and CNG is mind boggling. And I never managed to convince him that randomised controlled trials were more often than not conceptually unsound for making causal attributions and he should use more convincing methods in support of his arguments.

Dinesh got into trouble with the BRT. He and Geetam Tiwari – a common friend and colleague of many years, and a superbly trained architect and town planner – designed the bus corridor at the centre of the road drawing inspiration from a very successful similar design in Bogota, Colombia. The design provided for pedestrian footpaths and dedicated cycle paths on the sides, and putting the bus corridor at the centre was meant to keep the pedestrians and cyclists safe from the buses. Their penchant for ‘low cost’ avoided provision for escalators or subways between the road-sides to the bus stations at the centre.

As a result, though the design achieved its original aim of significantly increasing the overall flow of person-kilometres per unit time by increasing the flow of buses, it created incredible congestion for the cars when people crossed the roads to reach the buses. Poor implementation with unsynchronised traffic lights and poor enforcement of traffic discipline by the police compounded the problem. Though slowing down the cars did not adversely affect the person-kilometres per unit time objective, they failed to correctly assess the combined protesting power of aspirational ‘middle class’ car owners. The project ran into trouble and was ultimately abandoned when the AAP government came to power. Dinesh was extremely disappointed but he did privately admit – perhaps in a rare moment of weakness – that he perhaps went a little overboard with his egalitarian objectives.

What impressed many of us most about Dinesh was the way he ran the Transportation Research and Injury Prevention Programme (TRIPP) in IIT Delhi. It was run almost entirely using grant money from sponsored research projects funded by private entities, and he managed to co-opt people of all kinds – including civil, mechanical and bio-medical engineers, architects and town planners, statisticians and economists, applied mechanics folks and computer scientists – to work on transportation related problems in a multi-disciplinary approach. TRIPP is a one-of its-kind in the country and its unique success is rightly attributed to Dinesh’s rare ability to attract people and his open mindedness in sharing a project and its idea. Just a few days back, TRIPP was made a full-fledged research centre in IIT Delhi.

While writing this remembrance I contacted a common friend of ours, Sachin Maheshwari, who first introduced me to Dinesh. This is what I got back:

“Yes he was crazy.

“He was crazy to attempt and pull off creation and successful running of an interdisciplinary research programme funded entirely, year after year, by grant money; where people from disparate areas came together to do work to a common objective. He was crazy enough to spend forty five years of his life among people who actually thought he was crazy.”

That pretty much sums it up. Dinesh was an extraordinary faculty member and a public intellectual in the Indian academic setting. He will be missed.

Subhashis Banerjee is a professor of computer science and engineering, IIT Delhi.