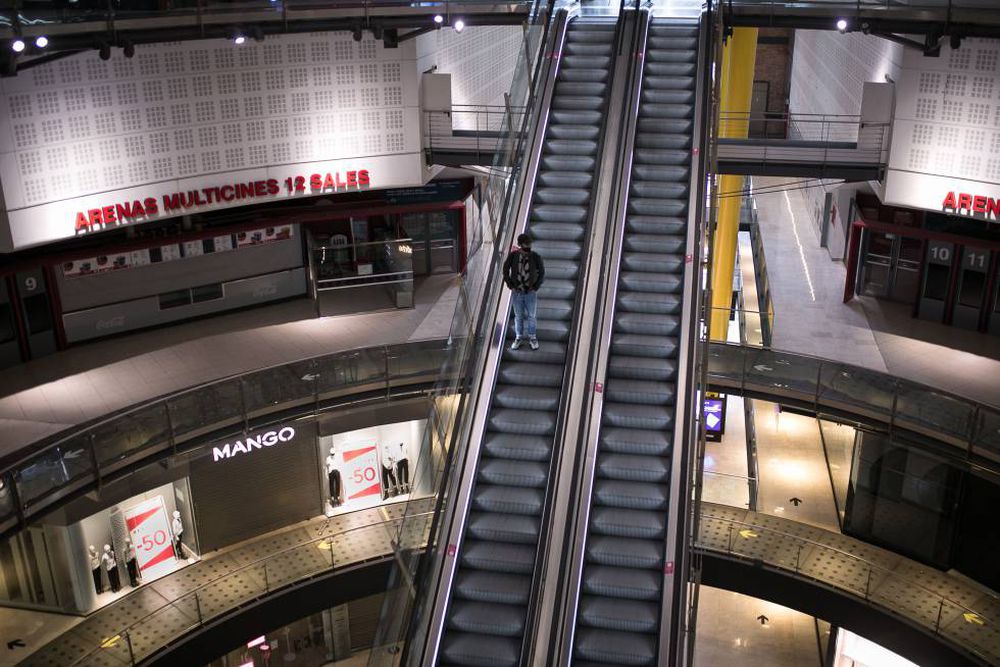 Several Spanish regions announced on Friday that they are making changes to the current restrictions in place to halt the spread of the coronavirus. Since the end of the deescalation of the first wave of the pandemic, regional governments have been responsible for managing the response to the pandemic and more recently, the Covid-19 vaccination drive. Many of the measures, however, will remain in place in a bid to prevent further spikes in infections.

In Catalonia, the regional government announced on Friday that shopping malls and stores (up to 400 square meters in size) will be allowed to open between Monday and Friday. The measure, approved by Procicat, the Catalan government agency coordinating action against the pandemic, will come into effect on Monday, March 1. Capacity for stores will be set at 30% and, as per the current rules, only essential businesses will be allowed to open on the weekends. Bars and restaurants in shopping centers will remain closed.

The restrictions on the broader hostelry industry, which have been in place since last October, have also been extended for another week. This means that bars and restaurants in Catalonia will still only be able to open in two shifts: between 7.30am and 10.30am, and between 1pm and 4pm. Takeaway service will be allowed until 10pm and home delivery until 11pm. Roger Pallorols, from Barcelona’s Hostelry Association called the decision to extend the restrictions an “arbitrary and discriminatory death sentence.”

With the exception of some minor changes, such as increasing capacity at swimming pools from 30% to 50% and allowing overnight school excursions, the bulk of the coronavirus restrictions in Catalonia will remain in place. Social gatherings are limited to six people from a maximum of two households, the curfew is set between 10pm and 6am and comarcas – a traditional administrative division in parts of Spain – remain under perimetral lockdown.

The decision to maintain many of the restrictions comes as Catalonia reports a slight increase in its incidence rate, with the 14-day cumulative number of cases per 100,000 inhabitants rising from 217 on Wednesday to 219 on Thursday. According to data from the regional government, the speed of the propagation of the virus, known as the R number – i.e. how many people a positive case infects on average – has been above one for the past two days. This is the limit that the health authorities have established to consider the pandemic under control.

In the Valencia region, the government will be relaxing the strict measures put in place on January 21 given the improving epidemiological conditions. With a 14-day cumulative number of coronavirus cases per 100,000 inhabitants of 176 – down from a high in the third wave of 1,400 – sidewalk cafés in the region will be opening until 6pm from March 1, although the interior of hostelry establishments will stay closed. A maximum of four patrons per table will be permitted, while masks will be obligatory when not eating or drinking.

Also from Monday, up to four people from different households will be able to meet in public, an increase from two. Meetings in private homes are still not allowed.

Stores will be able to open until 8pm rather than 6pm, with 50% capacity. Parks and public gardens will reopen while the capacity in religious spaces will be increased to 50%.

The curfew in Valencia will remain in place from 10pm to 6am, while the perimetral lockdown of the entire region – i.e. no one can enter or leave without a justified reason – is staying in place.

These measures are due to be in place for a further 15 days, but next week an interdepartmental commission will meet to evaluate the situation.

In Madrid, the nighttime curfew will remain at 11pm until 6am, while closing time for bars and restaurants will remain at 11pm. Social meetings in private homes will also still be prohibited, apart from couples who live in different homes or people who live alone, who can meet with another domestic unit. These measures are likely to be in place until at least March 14.

What’s more, groups of diners on sidewalk cafés are limited to six, and four inside bars and restaurants.

Stores must close at 10pm and only essential services can stay open later.

As for the perimetral lockdowns of basic healthcare areas, from Monday the María Curie area in Leganés will be subject to this confinement from Monday. The lockdown will be lifted, however, in Aravaca (Moncloa-Aravaca), Montesa (Salamanca) and Jazmín (Ciudad Lineal) in Madrid capital; in all basic healthcare areas in Alcobendas; and in Moralzarzal and Getafe Norte (Getafe), as well as in Villaconejos, Navacerrada, Becerril de la Sierra, Mejorada del Campo, Brunete, Griñón and El Álamo.

For another week, perimetral lockdowns will remain in place in Torrejón de Ardoz, Collado Villalba and San Sebastián de los Reyes, as well as in Andrés Mellado (Chamberí), General Oraá (Salamanca) and Vinateros-Torito (Moratalaz) in Madrid capital. In the rest of the region, the basic healthcare areas of Villanueva del Pardillo and Hoyo de Manzanares will also remain subject to perimetral lockdowns.

The lifting of restrictions in Madrid comes despite the region having the worst incidence rate in the country, of 322 cases per 100,000 inhabitants in the last 14 days. What’s more, two cases of the more-infectious strain of the coronavirus first detected in South Africa have been identified in the region.