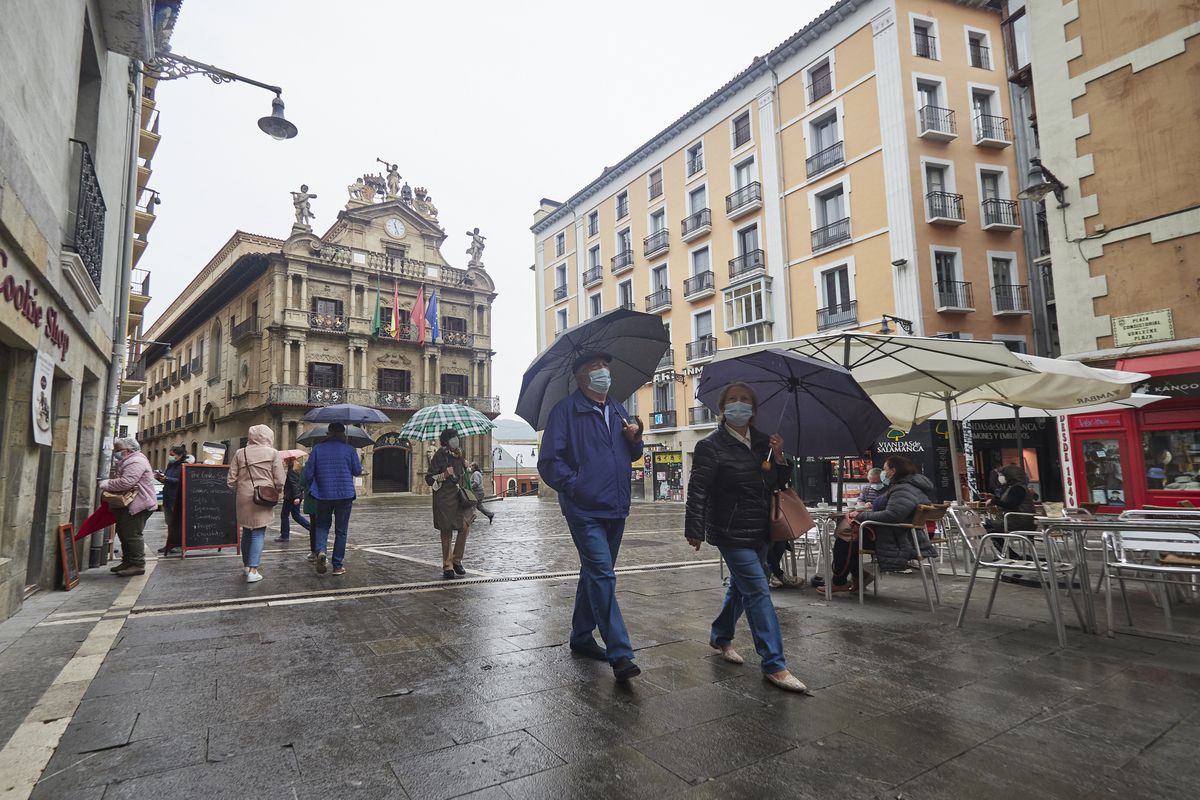 The inside of bars and restaurants open. Two weeks pass. Coronavirus infections go up. They close again. The number of new cases falls. Until they reopen once more. The epidemiological curve in the northern Spanish region of Navarre has been following this pattern since the fall, rising and falling according to the restrictions put in place by the local authorities. That’s according to an analysis of the data collated by the regional government itself. And while correlation does not always imply causality, both the authorities and the scientific evidence itself suggest that, in this case, it is very likely that there is a connection.

The region closed its food and drink establishments for the first time on October 22, when there were 1,058 positive cases per 100,000 inhabitants over the previous 14 days, according to data from the local health department. The peak of this wave arrived 10 days later, on November 1, with a rate of 1,142. From that point the figure started to fall. Bars and restaurants reopened on December 17, when there was an incidence of 188.9 cases per 100,000, a level that stayed flat for practically two weeks before sharply rising once more.

The regional government opted to close the inside of hostelry establishments on January 23, when cases had reached 444.8 per 100,000 inhabitants. And, once again, eight days later, the figures peaked and began to fall.

A new reopening took place on February 26, with an incidence of 127. The figure continued to fall until March 10, two weeks later, before it began rising once again. The last closure of indoor areas was on April 1 with an incidence of 305.1. This time, the drop took a bit longer: 17 days, and it is still there in the figures. All of these trends practically mirror the time that such restrictions are considered to take before they are reflected in the statistics.

Of all the measures being employed to stop the spread of Covid-19, one that has been gaining more and more support in terms of effectiveness, is a limit on indoor activities. The early advice that the coronavirus could not spread through the air has long since been revised. Now we know that this is the main route of infection, and that transmission can be greatly reduced when social interactions happen outside.

More and more research is backing up these findings. A study published in the health periodical Gaceta Sanitaria in April revised the international studies on the role of eating establishments in terms of the transmission of the virus. The conclusions were clear: “There is great consistency in the literature pointing to the closure of food and drink venues as being one of the most effective measures to reduce the incidence and the mortality of Covid-19. What’s more, some measures, such as limits on capacity and ventilation, are pointed to as being aspects to monitor when these establishments are reopened.”

Epidemiologist Pedro Gullón, one of the authors of the article, explains that while the rises and falls in epidemiological waves are always due to a series of factors, in the case of Navarre, it would seem to be a “very plausible hypothesis” that the closures and reopenings of the inside of these establishments have had a very important role. “We have seen regions where this measure has been very well correlated, such as Navarre, Asturias and Cantabria, and others where it has not. Because there are a number of causes happening at the same time in each place, and these can make the measure less effective: it’s either too late or it is the only one implemented. But the international evidence points to the closure of indoor areas in these establishments to be very effective at reducing transmission.”

The deputy premier of Navarre, Javier Remírez, has no doubts that among the “multiple factors” that influence the rise and fall of infections, this has been one of the most important ones. “Since the second wave started, we have seen that everything revolves around interiors, and that when more people get together and when the prevention measures are relaxed, they become areas of risk. Beyond the major restrictions, such as perimetral lockdowns and curfews, we have seen that others, which are more surgical, such as the closure of interiors, have an effect on reduction,” he continues.

What’s more, Navarre is a good indicator for measuring the incidence of the epidemic. Since the summer, it has had one of the highest incidences among Spain’s regions. “This doesn’t necessarily mean that we have had more infections, but rather that we have been doing more monitoring, thanks to a high rate of tracking and contact tracing,” Remírez explains.

The data backs up this claim. In the last report from the central Health Ministry, just the Canary Islands had a higher tracking rate. While the region is above the average in terms of cases diagnosed, its figures for hospital admissions, intensive care unit patients and Covid-19 deaths have been below the national average since the end of June, when the regional governments took back control of their own restrictions from the central government.

All this makes for an interesting case study. Gullón agrees that Navarre’s track-and-trace system has worked well, and that the measures have been more stable than in other regions. “The ideal thing to be sure that the role of the closures goes further than correlation would be a counterfactual: a region that is exactly the same in normal conditions that has applied the same measures apart from the closure of bars. But that is impossible. As such, we have to apply other criteria to see if there is causality: there could be a strong relationship in time that is clear, socially and biologically plausible. All of that is met in this case,” the epidemiologist adds.

A number of public-health experts consulted by EL PAÍS agree that one of the tools that the regions still have at their disposal now that the state of alarm has expired is to encourage outdoor activities. Ignacio Rosell, the secretary of the committee of Covid-19 experts in the Castilla y León region, points to avoiding contact with large amounts of people inside as “the best way to control the pandemic.” He believes that it will be essential to maintain capacity limits in food and drink establishments and stores. “I get the impression that people are more and more conscious about the difference between activities inside and outside,” he says. “But I’m worried that the state of alarm will lead the population to think that everything is open. Legally controlling this in homes is very difficult, but at least people should be made aware: ‘If you meet with your friends, make sure it is outside’.”