Copper Country News | The hostelry and the railway 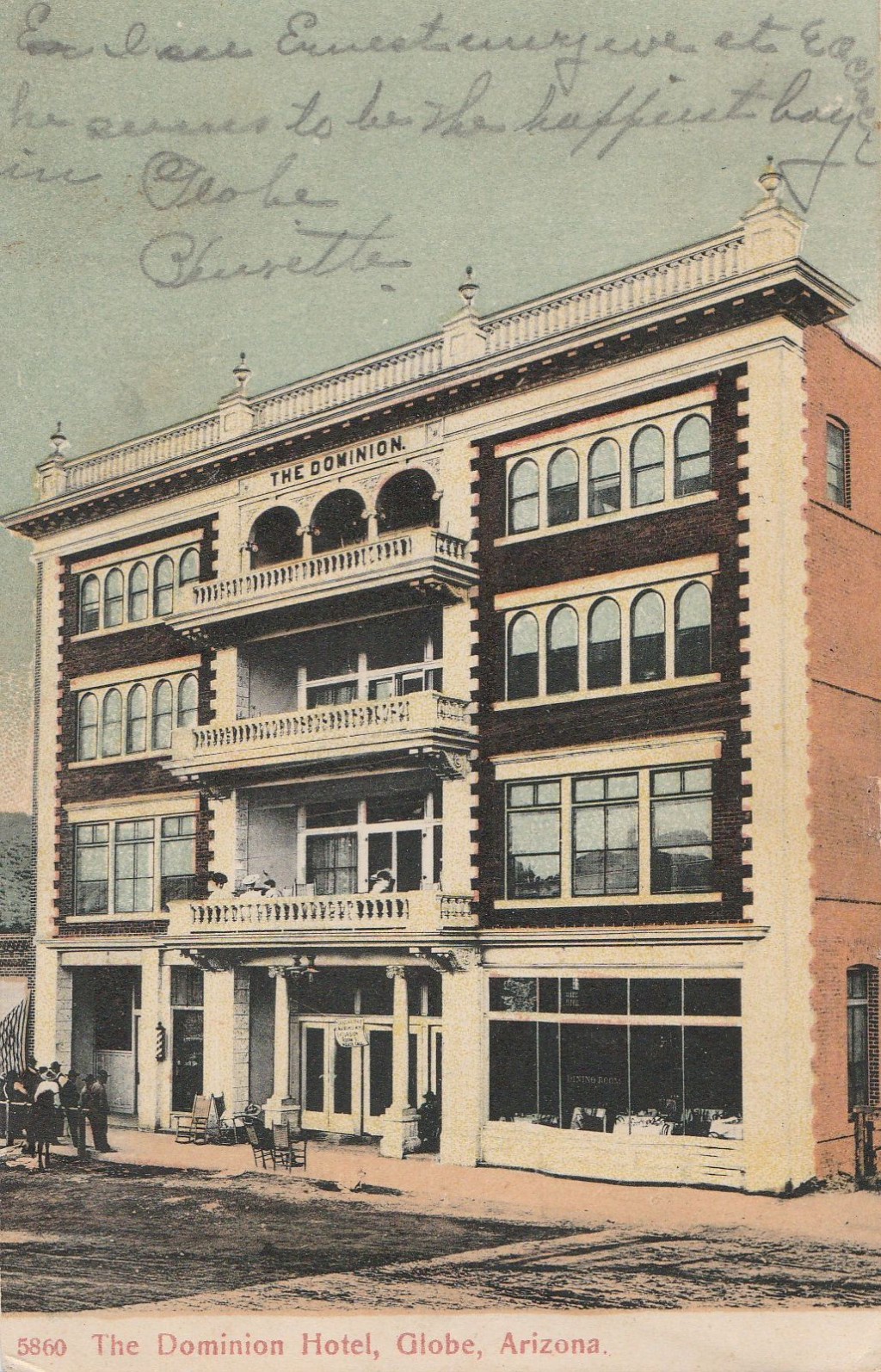 There are quite a few vintage picture postcards depicting Globe’s Dominion Hotel, but at least one also has a connection to a historic local railroad.

The card’s picture side is a color image of the now-vanished four-story hotel, which fell victim to a fire in late December 1981. When the card was sent from Globe to Seguin, Texas at the end of January 1910, the Dominion was less than four years old. The prominent hotel would go on to host two U.S. presidents, Teddy Roosevelt and Calvin Coolidge (both came to Globe for the dedication of their namesake dams), before its end.

Located on the northwest corner of Broad and Sycamore, the Dominion Hotel was known for its balconies overhanging the streets and the cocktails served in its Cactus Room. In a Dec. 31, 1981 article written shortly after the fire, the Arizona Silver Belt’s Ellen Kretsch further described the Dominion: “Her registration books show the signatures of people from all over the country, indeed all over the world. Chandeliers and lamps handmade from cactus adorned the dining rooms. Deep carpets covered the floors and wood and copper handrails gleamed, polished by the hands of hundreds of guests moving up the stairs.”

The Dominion opened to guests in 1906 according to the Silver Belt, whose Sept. 6 edition that year reported the hotel “is now in full operation, the dining room having been opened . . . to the general public this morning.”

On its way to Texas, the card rode the Gila Valley, Globe & Northern Railway; it was postmarked Feb. 1, 1910, a day after its message was written, in the Globe & Teviston Railway Post Office.

Incorporated Jan. 24, 1894, the Gila Valley, Globe & Northern – forerunner of today’s Arizona Eastern Railway – started construction at the settlement of Teviston (also known as Bowie Station) in Cochise County. It reached Globe in early December 1898; music, bonfires and cheering crowds awaited the arrival of the first passenger train and railway founder/president William Garland. In 1909 the railroad extended its tracks to Miami.

Teviston, at the other end of the line, was named after Arizona pioneer James Tevis, who was largely responsible for its founding. In 1910, the year the postcard was sent, the town was renamed Bowie.

Born in the 1830s in what later became West Virginia, James Tevis first came to Arizona in 1857. He helped build and operate the Apache Pass stage station. During the Civil War, Tevis served with Confederate forces in New Mexico, Arizona (he took part in the brief Confederate occupation of Tucson), Texas and Louisiana.

He then spent several years in St. Louis as a riverboat captain before coming back to Arizona in 1880. He settled at Bowie Station, where he was instrumental in starting the town named for him. “Captain” Tevis went on to serve a term in the territorial legislature, manage a Tucson hotel named the San Xavier and serve as postmaster for Teviston/Bowie Station. According to the Sept. 2, 1905 Bisbee Daily Review, he was reportedly the last to say goodbye to Geronimo as the famed Apache left Bowie Station in 1886 for his confinement in Florida. Tevis passed away in his namesake town in 1905.