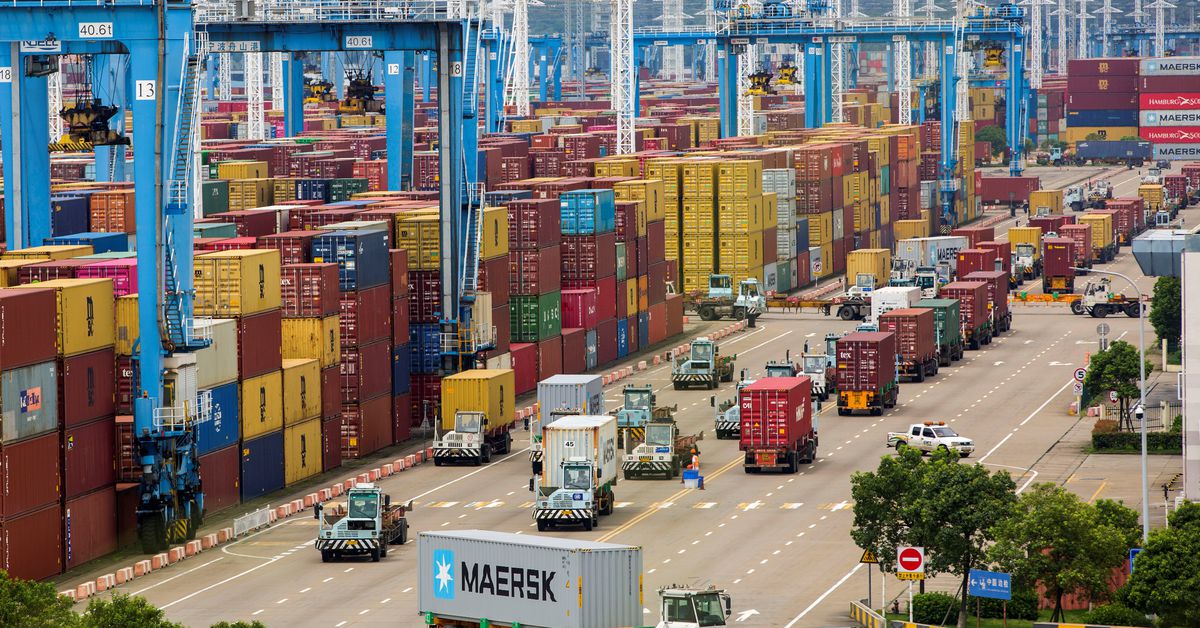 BEIJING, Aug 17 (Reuters) – (This Aug. 17 story corrects attribution of quote in paragraph 11 to Jim Bureau of JAGGAER, not Richard Lebovitz of LeanDNA.)

Several Chinese ports are facing congestion as vessels due to call at Ningbo are being diverted and cargo processing is slowed partly due to stricter disinfection measures under China’s “zero-tolerance” coronavirus policy.

On Tuesday, more than 50 container vessels were queuing at Ningbo port, China’s second largest marine centre, Refinitiv data showed, up from 28 on Aug. 10 when a COVID-19 case was reported at one of its terminals.

Leading international shipping groups have warned their clients of delays and route adjustments. At least 14 vessels operated by CMA CGM (CMACG.UL), five Maersk (MAERSKb.CO) vessels and four Hapag-Lloyd ships have decided to skip Ningbo, while dozens of vessels are adjusting their schedules, the shipping groups said.

China’s economy is losing momentum as a result of new coronavirus restrictions and global supply chains face further strains with the curbs adding to queues at major Chinese transportation hubs, already stretched by a resurgence of consumer spending, shortage of container ships and logjams at ports. read more

China’s Ministry of Transportation has ordered all ports to have special teams to deal with foreign vessels and required their crews to have health certificates or negative tests before allowing them to load and discharge cargos.

Ports also have their own rules, with some applying additional precautions to vessels that stopped at ports in high-risk regions, such as India, Laos or Russia, in the past 21 days.

“China’s zero tolerance policy is good for the pandemic but bad for the supply chain,” said Dawn Tiura, chief executive officer of Sourcing Industry Group, a U.S.-based association for the sourcing and procurement industry. “This timing is very tough considering the uptick in back-to-school and return-to-work shopping in addition to the upcoming holiday shopping season.”

Ningbo Zhoushan Port Co (601018.SS) said in a statement late on Monday its handling volume has resumed to about 90% of its average daily level in July, following efforts to mitigate the impact of the shutdown of a terminal, which accounts for about 20% of Ningbo’s container handling capacity, after a COVID-19 case was detected there last week. read more

Vessels scheduled to call at the terminal are being re-routed to nearby ports. Shanghai port had 34 vessels waiting at anchorage, compared to 27 on Aug. 10, while the number of vessels waiting at Xiamen port – 700 km south of Ningbo – rose to 18 on Tuesday from four early last week.

“Cargoes have been piling up at port recently due to tight labour force from portside and relevant departments, while increasing shipments also weighed,” said a bulk ship operator at China’s eastern port city Lianyungang.

“China is an important component of the global supply chain … Any shutdowns or delays from China have the potential to delay finished goods two or three tiers out,” said Jim Bureau, chief executive officer of JAGGAER, a U.S.-based procurement technology company.