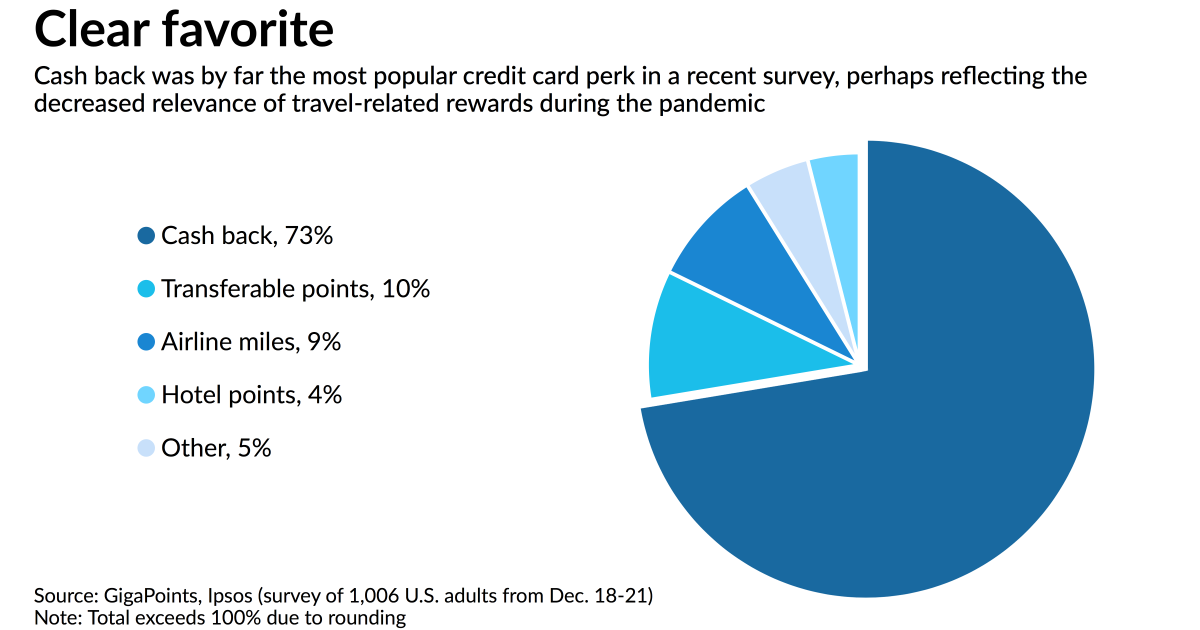 The nation’s largest credit card issuers, forced during the pandemic to rely less on travel-related perks to attract customers, are now trying to gauge how quickly Americans will start flying again.

The speed at which air travel resumes figures to affect the profitability of banks that lean on travel rewards offers to drive loan growth in the credit card business.

Those companies include JPMorgan Chase, which provides a $300 annual travel credit on its Sapphire Reserve card; American Express, which offers cards with Delta Air Lines and the hotel chains Hilton and Marriott; and Citigroup, a longtime partner of American Airlines.

“Certainly travel has been one of the hardest-hit categories,” Pam Habner, Citi’s head of U.S. branded cards and lending, said in a recent interview. “We feel pretty optimistic that that will turn around as we turn the corner to the back half of this year and into 2022, as people become vaccinated and they feel more comfortable traveling. I think there’s pent-up demand.”

Industry observers expect strong competition in credit card rewards this year, as issuers offer more attractive perks in an effort to rebuild loan portfolios that were eroded during the pandemic. Card companies have long used travel-related rewards to win the business of wealthier consumers, but many Americans who were stuck at home during the pandemic have been finding cash-back offers more attractive.

Across the industry, outstanding balances fell to $820 billion in the fourth quarter of 2020, down from $930 billion a year earlier, as more consumers paid down their debts and card issuers became more selective about approving new customers.

“The big concern right now in the credit card industry is that revolving balances have dipped substantially,” said Brian Riley, an analyst at Mercator Advisory Group. “One of the things that draws people into revolving debt is the rewards that comes with it.”

Over the last year, card companies that traditionally lured customers with points redeemable for frequent-flyer miles scrambled to adjust their rewards to match consumers’ stay-at-home lifestyles.

Amex, a leader in hotel and airline cards, started offering statement credits for cellphone bills. Citi allowed customers of its Prestige card to apply their $250 travel credit to spending at supermarkets and restaurants. Chase Sapphire Reserve cardholders became eligible for up to $120 in credit for Peloton home-exercise memberships.

The card issuers had to pivot quickly. At Discover Financial Services, some timelines were accelerated given the dramatic shift in customer spending habits, said Gaurav Sharma, senior vice president of acquisition marketing at the Riverwoods, Ill., company. One change that Discover made last summer was to allow cardholders to redeem miles at gas stations.

Some of the pandemic-era offers have now expired. But others are scheduled to run through the end of 2021, perhaps reflecting a belief that the travel business will not fully recover for many months.

While Citi expects consumer travel to rebound throughout this year, Habner acknowledged that business travel and overseas flights will likely take longer to bounce back. Last Thursday, 1.4 million travelers passed through Transportation Security Administration checkpoints, the highest number in more than a year, but still down 39% from the same date in 2019.

“It feels like it will be a rolling recovery,” Habner said. “It’ll be into ’22 and maybe beyond.”

While Habner said that Citi’s customer attrition has fallen to a record-low level, she also acknowledged that it has become harder to find new enrollees for travel-related credit cards at a time when air travel has plunged. In the fourth quarter of 2020, global revenue in Citi’s card business fell by 18% from the same period a year earlier.

When asked about the acquisition during its most recent earnings call, JPMorgan executives said that only about 30% of the $140 billion that the company’s customers spend on travel currently goes through Chase. “So there’s a huge opportunity to capture a greater share,” said Chief Financial Officer Jennifer Piepszak.

She preached patience regarding the travel industry’s prospects, saying: “We are excited about those opportunities whether they come in 2021 or 2022 or beyond.”

The pandemic-era pullback in travel spending by affluent consumers has led to more intense competition for their business, according to Capital One Financial CEO Richard Fairbank.

“We’ve seen increases in reward levels,” he said during Capital One’s earnings call in January. “And I think that’s probably a natural thing for us to expect in this particular environment, even though paradoxically it’s associated with so much pullback.”

In a December poll by Ipsos, 19% of U.S. adults said that they changed which credit card they used most as a result of the COVID-19 pandemic. Another 19% said that once the pandemic subsides, they anticipate changing the credit card that they use primarily to earn rewards.

Cash back is easily the most popular type of credit card perk, according to the survey, which was conducted on behalf of GigaPoints, an online platform that analyzes consumers’ spending patterns to make card recommendations.

Some 73% of survey respondents said they prefer cash, compared with only 9% who chose airline miles and 4% who selected hotel points.

Though the survey was conducted for the first time in 2020, GigaPoints CEO Erik Budde believes that the pandemic has boosted the popularity of cash rewards. “People are a little bit more likely to lean toward cash back at times when they just don’t think they’re going to be getting on a plane, [or] they’re not going to be staying at a hotel,” he said.

TD Bank is among the banks that are leaning into the popularity of cash-back rewards. On Monday TD unveiled a new credit card, intended to become its flagship plastic, that offers 1% cash back on purchases, plus an additional 1% when the rewards are redeemed into an eligible TD bank account.

“This launch is an answer to our customer feedback,” said Paramita Pal, head of U.S. bankcard at TD. “We did a lot of customer research.”

TD cited a February survey in which 62% of millennial respondents with a travel rewards card said they changed or wanted to change their perks, given the curtailment of travel over the last year. Of those consumers who wanted to switch, 37% said they thought they would be better served by cash back instead of miles or travel points.