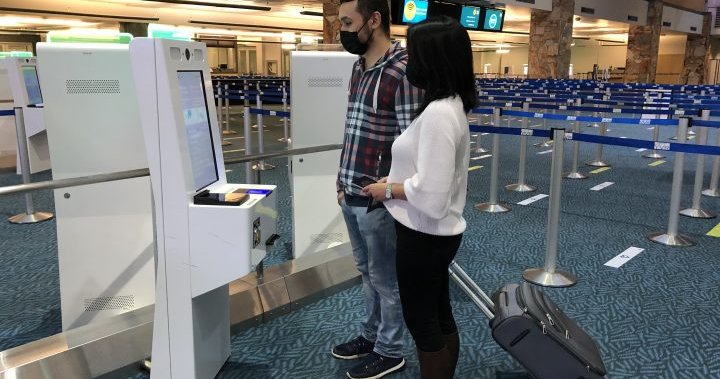 A new Canadian health order requiring a three-day hotel quarantine for air travellers got off to a rocky start on Monday, as some passengers complained of long waits to access the hotel-booking system.

The order comes amid another 2,886 cases of COVID-19 reported by health authorities across Canada, which pushed the national caseload to 849,522. Another 49 deaths related to the virus were also announced, with the death toll currently standing at 21,723.

Across Canada and abroad, travellers spoke of disconnected calls and hours or even days waiting on the line to make a reservation, forcing some to cancel their flights altogether.

Markham, Ont., resident Anuja Sharma, who flew to India roughly two weeks ago with her mother and her sister to resolve a legal issue with a family property, said Monday her family had yet to secure a spot, despite having spent hours on hold with the booking line.

“Collectively, between my husband and me, we’ve spent 14 hours on the phone,” Sharma said from India, adding that neither she nor her husband got through.

Read more:
Flying back to Canada? Here’s what you can expect at the new COVID-19 quarantine hotels

At the Montreal airport on Monday, Loveline Akonbeng, who landed on a flight from Brussels, said it took her sister three days waiting on the phone for multiple hours to finally get through. “Three hours of waiting and sometimes the line would cut off by itself,” said Akonbeng, who described feeling “panicked” as her travel date approached.

Tarek Mahmud Sonon and his wife Rushda Raman, who are moving to Regina from Bangladesh, were forced to cancel their flight and delay the beginning of their new life in Canada after being unable to book a hotel.

The couple and their relatives in North America unsuccessfully tried calling the reservation line, Sonon said in an email, estimating they spent five to six hours on hold for each attempt. The pair, who are moving to Canada on work and student visas, were supposed to arrive on Monday. They underwent a pre-departure COVID-19 test before being faced with the hotel hurdle, he said.

“We are now in great depression thinking about our future and next course of action,” Sonon said.

Toronto resident Deb Robinson said she turned to social media over the weekend to voice her concerns about the system after being unable to book a hotel despite multiple tries, only to be met with a barrage of angry messages from users upset that she travelled in the first place.

Robinson is visiting her sick 88-year-old mother at an assisted living facility in Florida, knowing that this may be her last chance to see the elderly woman.

“They told us what we were going to have to do if we came back after this date,” Robinson, who is scheduled to return Thursday, said in an interview. “But now they’re not keeping up their end of the bargain. I feel very frustrated.”

Prime Minister Justin Trudeau has said the tighter border controls are meant to keep everyone safe, not punish travellers. At a press conference on Friday, Trudeau acknowledged there had been issues with the phone lines but said the problems would be cleared up shortly.

A group that advocates for Canadian family reunification filed a challenge to the hotel quarantine health order on Friday in Quebec Superior Court, arguing the measure violates passengers’ rights and is too expensive for low-income families. The group is also asking the government to make an exception to the quarantine rules for compassionate reasons and family reunifications.

The hotel stays, which must be paid for by the travellers, are just one of a series of measures that came into effect on Monday to limit the spread of COVID-19 and the introduction of variants considered more transmissible than the dominant virus strain circulating in the country.

Most incoming air travellers will need to get tested for the virus upon arrival and again toward the end of their mandatory 14-day quarantine.

Travellers arriving at land borders will be given self-swab kits, and testing will be provided on-site at five high-volume border crossings. The new rules are in addition to previous orders that require a negative test result within 72 hours of arrival. Travellers will need to complete a second test on Day 10 of their self-isolation period.

The number of COVID-19 cases has continued to decline steadily across much of the country, according to Canada’s chief public health officer.

Ontario reported 1,058 new cases of COVID-19 and 11 more deaths linked to the virus on Monday, as the York region returned to the province’s colour-coded system of pandemic restrictions on Monday. A stay-at-home order remained in effect for three other areas, including Toronto.

Quebec’s government-mandated public health institute said 86 more suspected cases of coronavirus variants had been detected in the province, for a total of 415 suspected cases. Quebec has confirmed 23 cases of variants.

In total, another 805 cases were added by the province Monday, as well as 11 new deaths. The province still stands as the hardest hit in Canada, with a total of 10,318 fatalities linked to the spread of COVID-19.

At least 10 schools across the province have been fully or partially closed because of suspected cases of variants, prompting the president of a union representing teachers at Quebec’s English-language schools to call for stronger health measures to protect teachers and students, including smaller class sizes and a greater use of rapid tests.

In British Columbia, six schools in Surrey and another in Delta — just outside Vancouver — have had cases involving variants.

2:32Booking mandatory COVID-19 hotels a struggle, according to some travellers

Booking mandatory COVID-19 hotels a struggle, according to some travellers – Feb 22, 2021

Dr. Elizabeth Brodkin, chief medical health officer of the Fraser Health authority, said cases tested so far have been linked to the variant first identified in the United Kingdom, but she declined to say how many cases have been detected at the schools.

B.C. reported a total of 1,428 new cases spread across Feb. 19 to 21. On Saturday, the province added 504 infections, Sunday another 475 cases and on Monday a total of 449 more infections. Eight more deaths linked to the virus were also reported over the past three days.

Alberta reported 11 new cases of variants across the province, bringing that total to 289. Overall, the province added 273 new COVID-19 cases on Monday, as well as 16 more deaths.

Manitoba tallied another two deaths linked to the virus on Monday, as well as another 97 cases. Saskatchewan on the other hand reported another 177 infections and zero new deaths.

New Brunswick, meanwhile, reported a seventh COVID-19-related death at an Edmundston long-term care home, leading the Opposition Liberals to call for a review into the Belle Vue facility, which has had more than 90 cases of COVID-19. Another case was added to the province on Monday as well, pushing the provincial total to 1,424.

Newfoundland and Labrador added 14 new cases while Nova Scotia reported just one. P.E.I. did not report any new case data on Monday.

Nunavut added 12 new cases on Monday, while both the Yukon and the Northwest Territories did not report any additional cases during their updates.

Cases of the novel coronavirus continue to increase worldwide, with the global infection total now standing at 111,351,000 according to Johns Hopkins University. To date, a total of 2,466,100 patients have since succumbed to the virus as well, with the U.S., India, Brazil and Mexico leading in either cases or deaths.

— With files from Global News