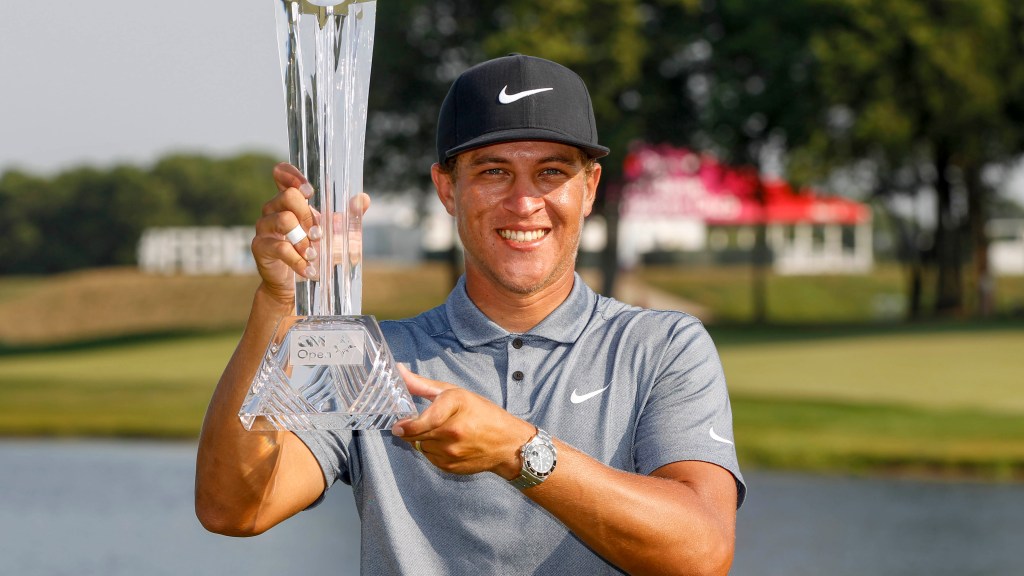 BLAINE, Minn. – Cameron Champ has worked hard of late on finding the proper balance in his search to enjoy life both inside and outside the gallery ropes, taking great measures to relax more with golf club in hand and appreciate the game while not being so hard on himself when poor rounds and tournaments pile up.

Golf, he has said, isn’t the only thing in his life.

One of those measures was having two influential names written on his glove this week as he played the 3M Open – Jessica, who he married last December, and Mack “Pops” Champ, his grandfather who passed away in 2019.

“My grandfather is kind of my hero; he is who I want to be in life,” Champ said. “My wife is my everything. She’s what helps me out here on Tour. She’s my best friend and I just love her to death and everything that she gives me.

“When I look at (the glove), it was more so just a comfort factor, just realizing there’s a lot more to the game than most people think.”

Looking nothing like the angry golfer who hadn’t had a top-10 finish this year and had missed four cuts and withdrew from another tournament in five starts before tying for 11th in the John Deere Classic two weeks ago, Champ weathered one and all storms at hot TPC Twin Cities to win his third PGA Tour title.

With a final-round, bogey-free, 5-under-par 66, Champ, who won the 2019 Sanderson Farms Championship and the 2020 Safeway Open in his first two seasons on the PGA Tour, finished at 15 under and two shots clear of Louis Oosthuizen, Jhonattan Vegas and Charl Schwartzel.

That proved useful as Champ didn’t panic when he blew his drive on the 18th way left into high grass and was forced to try and chip back to the fairway. His shot wound up in the primary rough 207 yards from the hole. He laid up from there to 127 yards and then hit his fourth to inside three feet and finished off with a par.

Walking off the last hole felt a lot better than walking off the course at the Rocket Mortgage Classic in Detroit a few weeks ago when he missed another cut and told himself he had to change his ways.

“It’s just been a struggle between the ears. I had to figure it out,” Champ said. “I’ve struggled since January, and it hasn’t really been as much of technique, it’s just been more of myself. I just turned 26. I’ve done a lot and I’ve had some success, but at the end of the day I still have to figure out myself and how I’m going to manage both of those sides.

“After Detroit I just took a step back and said, you know what, this is enough, I can’t keep going on this way, I’m not enjoying the game, it’s not fun, and in order for me to enjoy the game and for it to be fun, I have to be true to myself and who I truly am as a person. That’s kind of how I’ve been on the course.

“The last two months I’ve been in a lot better head space and kind of realizing what is truly important to me and what is not.”

Vegas, who was one shot out of the lead when he three-putted from 57 feet on 17 and then just missed his eagle attempt from 20 feet on 18, closed with a 68 to finish at 13 under and in a tie for second. On Monday, he will fly to Tokyo to represent Venezuela in the Olympics.

“It’s super exciting. We don’t really get to play for our countries that often and every chance you get a chance it means a lot,” Vegas said. “Venezuela’s been going through extremely rough times lately. To be able to represent it and hopefully give the country a medal would be a dream come true.”

Oosthuizen, who finished in a tie for third in last week’s British Open after finishing runner-up in the previous two majors. He nearly holed out for eagle from 96 yards on the 18th and shot 66.

“I was happy to play this week. I sort of didn’t really want to just think about last week, about not playing great on that Sunday,” Oosthuizen said. “Great track. We had a good time here this week and I’m just trying to see if I can go one better than all these seconds and thirds.”

Schwartzel shot 68. Keith Mitchell, who tied a PGA Tour record when he began his third round with seven consecutive birdies, shot 67 to finish fifth at 12 under.

Overnight leader Cameron Tringale, who was trying to win his first title in his 306th start as a professional on the PGA Tour, was one shot out of the lead when he made a triple-bogey 6 on the short par-3 13th and finished with a 74 and in a tie for 16th. He has won slightly more than $14 million in earnings, the most in PGA Tour history for a player without a victory.

As for Champ, he said he’s never been happier.

“Everybody learns and everybody matures at different stages in their lives,” he said. “I’m always a late learner or late bloomer and I’m trying to be the opposite of that. You know, now I’m married, now I have responsibilities, soon I want to start a family with my wife. Again, for me it’s more so realizing what I want to do in the game of golf and then who I want to be at home. It’s a balance you have to find, and if you don’t, it can really haunt you and it can cause a lot of issues.

“I just had to take a step back. I love this game, it’s given me so much, I’m going to give it my all, but I need to be who I am and not, you know, worry about outside noise or what people may think or this and that.”