An LPGA University Tour Ranking? Here’s who would make it 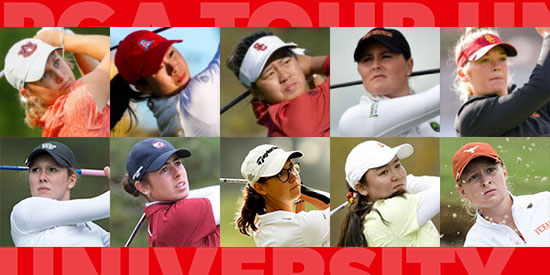 An LPGA University Tour Ranking? Here’s who would make it

By Kenzie Wright for AmateurGolf.com

The summer of 2020 was a memorable one for most, but especially for the top collegiate men who were notified that the first PGA Tour University ranking had been published. The announcement kick-started what would become the “fast track” for top collegiate golfers to earn professional status based on their tournament performance.

After watching the ranking progress week after week, the question arises: what would this road to professional golf look like on the women’s side of collegiate golf?

Who would be in the top ten, guaranteeing a spot into the Symetra Tour, the LPGA’s equivalent to the Korn Ferry Tour? Would this give female players more incentive to stay all four years at their university? The number of collegiate women who have chosen to turn professional before completing their four years of eligibility suggests maybe an alternative could have changed their minds.

The rankings are based on the World Amateur Golf Ranking (WAGR), tournament results, and strength of field ratings similar to the current setup of the PGA Tour University Ranking. Due to COVID-19 restricting schedules and cutting interconference play for most, the results of this ranking are purely to act as a model and are by no means official.

Just like the men, the imaginative LPGA Tour University Ranking would reward status to their respective tours based on final ranking.

Looking at performances from the top fifth-year and senior women’s golfers so far in this academic year, here would be the top ten players in the LPGA Tour University Ranking.

10. Kaleigh Telfer, Auburn
While most conferences weren’t able to compete in the fall season, the SEC continued on strong and hosted appreciable events considering the circumstances. Telfer found herself one of the lucky players who were given the opportunity to play, and she didn’t waste the chance. With a solid ninth-place finish at the difficult Blessings Intercollegiate, the Tiger was able to get the year started on a high note. Recently, the South African finished 15th in the Gamecock Intercollegiate and continues on her race to the National Championship with her team.

9. Yu-Sang Hou, Arizona
After being a part of the NCAA National Championship team in 2018, Hou has bolted up the ranks individually. Without a fall season, Hou spent her time competing in several Taiwan LPGA events, even garnering a win on the way. In the spring so far, the Wildcat finished sixth in the Sun Devil Winter Classic to quickly find her way back in collegiate golf. With early success already in the professional ranks, it is easy to say Hou will be competing on tour in the future.

8. Alyaa Abdulghany, Southern California
USC has produced some of the greatest talent in women’s collegiate golf in past years, and the showing in the rankings proves the Trojans don’t plan on slowing down. Abdulghany is an incredible talent who we saw clinch three top-ten finishes in the Trojans’ first three spring outings, notably a second-place finish at The Gold Rush. Perhaps we will see Abdulghany hoisting a trophy by season’s end.

7. Olivia Mehaffey, Arizona State
A blazing hot tournament-closing 62 at The Clover Cup should speak for itself when considering Mehaffey as a top collegiate player. With an appearance at the 2020 U.S. Women’s Open, and an exemption into the Symetra tour’s Carlisle Arizona Women’s Golf Classic, the Sun Devil is meant for the spotlight. Mehaffey continues to be a role model for collegiate women’s golf.

6. Amelia Garvey, Southern California
As the second Sun Devil on this list, Garvey competed in the 2020 U.S. Women’s Open with teammate Allisen Corpuz and was able to begin her 2021 spring season with a fourth-place finish at the Sun Devil Winter Classic. The Australian’s past performances have spoken for themselves as to why she should be considered a top women’s collegiate player.

5. Emilia Migliaccio, Wake Forest
Migliaccio has been a star in the amateur ranks for quite some time now, and she continues to prove she is meant to be a champion for women’s golf. After competing in two of women’s golf’s majors in the fall of 2020, the Wake Forest Senior notched a fifth-place finish at the Palmetto Intercollegiate to assist her team in a win. We have not been able to see Migliaccio’s full potential due to the COVID shortened fall-season, but the potential is there to see her flourish in the coming months.

4. Ana Pelaez, South Carolina
After foregoing the fall semester, the Spaniard has quickly proven her game in a fiery start to the Spring. Pelaez finished third and sixth respectively in the SEC-heavy Moon Golf Invitational and Gamecock Intercollegiate. Proving she had nowhere to go but up, Pelaez clinched a second-place finish at the Valspar Augusta Invitational. Considering the success we have seen so far in such a short amount of time, Pelaez will continue to succeed.

3. Agathe Laisne, Texas
Laisne didn’t need a fall schedule to solidify her strong standing in the WAGR ranking. Coming off an appearance at the 2020 U.S. Women’s Open, the Longhorn had a shaky start at the ICON Invitational, finishing 36th, but quickly found her footing once again at the Arizona Wildcat Invitational. She fired off rounds of 68-75-66 to tie for second. Laisne’s continued success both in the U.S. and overseas proves her to be one of the top amateur golfers in the country.

2. Allisen Corpuz, Southern California
After being one of the 20 selected amateurs to compete in the 2020 U.S. Women’s Open, Corpuz started her Spring schedule blazing hot with two wins, first at the Lamkin San Diego Invitational, followed by The Gold Rush. Capped off with a third-place finish at the Sun Devil Winter Classic and a fourth-place finish at the Arizona Wildcat Invitational has Corpuz on a scorcher of a season so far. It is safe to say the Trojan will be a fun player to watch as the season continues.

1. Kaitlyn Papp, Texas
With by far one of the most impressive amateur careers, Papp continues to prove that she is ready for the professional ranks. With a 9th place finish at the 2020 U.S. Women’s Open, the Longhorn demonstrated exactly why we will be seeing her tee it up with the world’s best professionals in the future. Papp continues to dazzle and will surely be one to watch on the LPGA.

All in all, the future of women’s golf is in great hands. Fortunately for us, we will be able to see most if not all of these young women showcase their talents later this spring at the NCAA Division I Women’s Golf Championship at Grayhawk Golf Club in Scottsdale, Arizona May 21-26 on Golf Channel and its respective sister stations.