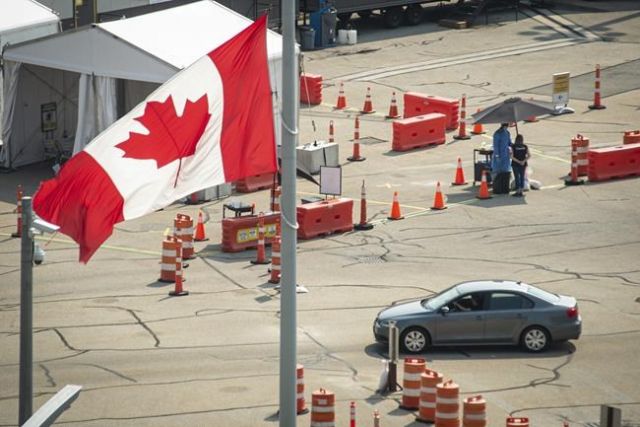 Car cross the border into Canada, in Niagara Falls, Ont., on Monday, August 9, 2021. American citizens and permanent residents are now allowed to enter Canada for non-essential purposes if they can provide proof that they’ve been fully vaccinated for at least 14 days.THE CANADIAN PRESS/Eduardo Lima

American tourists returned to the Niagara Region for the first time in more than a year on Monday, eager to see the thundering falls, take in the area’s attractions and explore nearby wine country.

They were welcomed back by local businesses who rely heavily on tourism and have been feeling the pinch from more than a year of pandemic restrictions at the border.

“We’re so happy to be in Canada, this is our first time,” said Janine Steeves, who drove across the Rainbow International Bridge into Niagara with her children.

Steeves, a resident of Illinois, said it took about 90 minutes to get across the border, adding that officials were efficient and friendly.

Ashley Earl also decided to visit the Niagara Region for the first time with her mother on Monday, saying they wanted to take advantage of the change in restrictions during a vacation.

“I’ve always wanted to see the Niagara Falls,” said Earl, who is from North Carolina. “I’m a big nature person … and (the trip) just happened to be on my birthday so it’s just really, really special.”

Non-essential U.S. travellers who’ve had a full course of a Health Canada-approved COVID-19 vaccine are now allowed in the country, provided it’s been 14 days since their last dose and they have proof of a negative COVID-19 molecular test within the last 72 hours.

At a border crossing in Niagara Falls, cars lined up to be processed on Monday. In the nearby tourist district of Clifton Hill, sidewalks and attractions were buzzing as families enjoyed the summer day.

Businesses in the border region said they had eagerly been awaiting the rolling back of travel restrictions.

“After 17 long months, we are very pleased to welcome U.S. visitors back to Niagara Falls Canada,” said Janice Thomson, the head of Niagara Falls Tourism, adding that nearly 30 per cent of visitors to the area come from the U.S.

The owner of Niagara Wine Tours International said demand for experiences in wine country has been up since Ontario began reopening and that’s expected to increase with the changes at the border.

“We’re excited to have our U.S. friends visiting and touring with us once again,” said Lance Patton, noting that travellers from the States often visit the area to celebrate birthdays, mark anniversaries, hold corporate events and enjoy group getaways.

Richard Taylor, president of Niagara Casinos, also noted that American visitors are a significant part of the industry and said the company looked forward to welcoming them back.

Zahir Ismail, owner of the Niagara Falls and Niagara-on-the-Lake locations of the popular BeaverTails eateries, said he was excited to serve American customers again but hoped people would follow public health guidelines to ensure businesses like his don’t have to endure further pandemic shutdowns.

“I hope this lasts for a longer period of time because I’m afraid with the whole Delta variant, are we going to close down again,” said Ismail.

The mayor of Niagara Falls said his city is glad to finally be approaching some version of normalcy, but he doesn’t expect a “mad rush” of American tourists heading for the border this week.

Mayor Jim Diodati has been calling for the reopening of the border for months, saying the city’s economy relies heavily on tourists.

“I think it’s going to be gradual, like a dimmer switch, because for day trippers, it’s an awful lot of work and hoops to jump through in order to be able to cross that border,” he said.

Similarly, the company that runs the Hornblower cruises that take visitors up to Niagara Falls isn’t expecting a significant boost in business right away as a result of the changes at the border.

Mory DiMaurizio, the chief operating officer with Niagara Cruises, said Canadian vessels that can hold 700 passengers are only operating at 25 to 35 per cent capacity, while their American counterparts, the Maid of the Mist boats, are full.

“We’re prepared for (travellers coming in), but I’m not suggesting that we’re anticipating a massive surge of people.”

All eligible travellers must use the ArriveCAN app or web portal to submit information such as their vaccination details.

Fully vaccinated travellers will not need a post-arrival test unless they have been randomly selected to complete a Day 1 COVID-19 molecular test.

There are no changes to the mandatory testing requirements for unvaccinated travellers.

The U.S. has been mum on when it might begin to ease its own restrictions on non-essential Canadian travellers at land crossings. Air, sea and rail travellers are exempt.