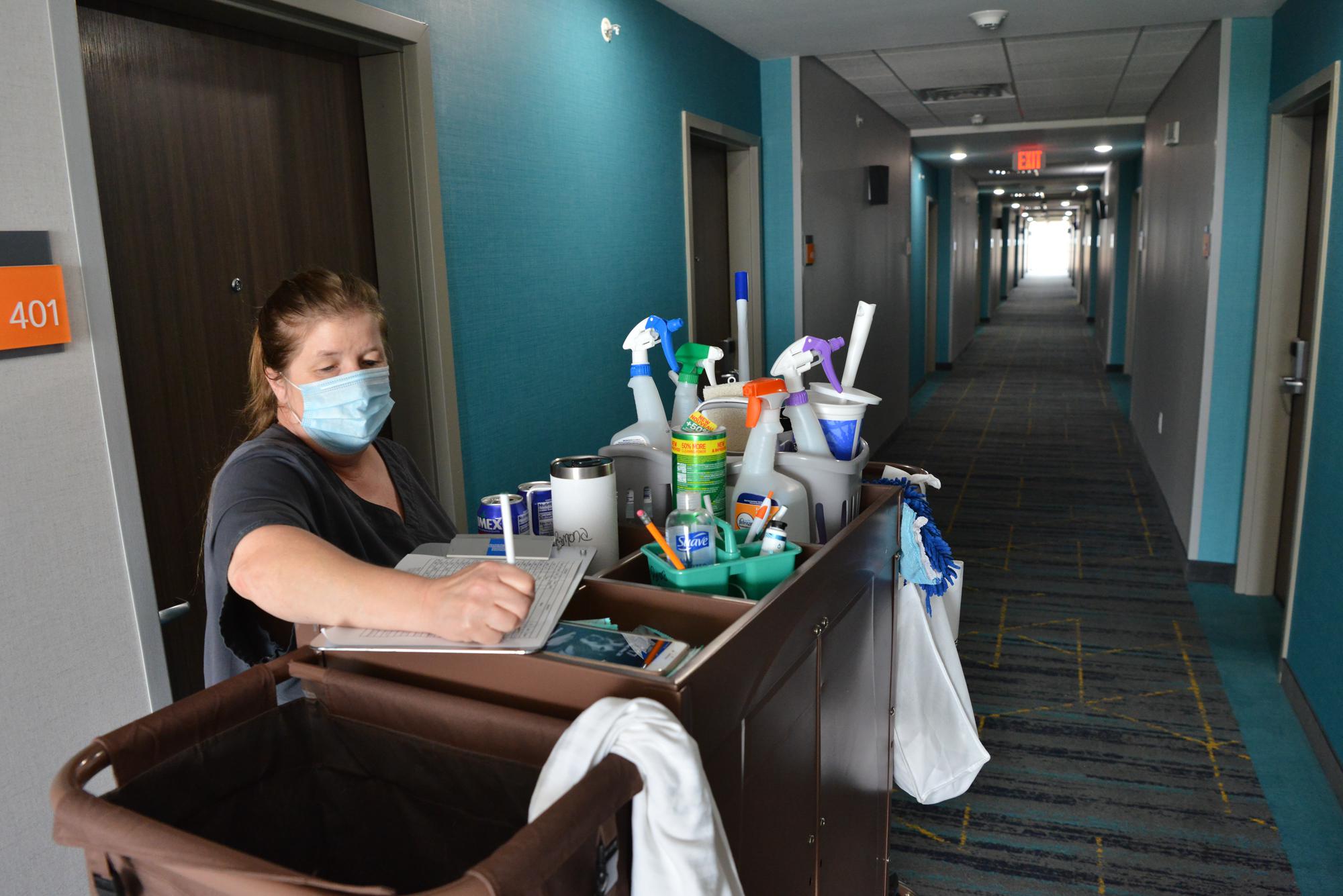 Katie Graves managed to hire one housekeeper at a job fair organized to match workers with San Antonio tourism jobs. That left the La Cantera Resort & Spa still short on staff for 71 positions.

“There’s not a lot of people here,” Graves said of applicants at the hiring event last week.

Four dozen hotels, restaurants, tourist attractions and theaters set up booths Wednesday on the ground floor of the Alamodome, hoping to fill hundreds of open jobs. But only about 200 job seekers came out for the four-hour fair, according to Visit San Antonio, the public-private tourism organization that markets tourism in the city.

That would equal about four applicants per employer — if the number of applicants was divided equally among exhibitors.

The event offered an illustration of a challenge facing San Antonio as spring transitions to summer, the pandemic eases and leisure travel rebounds. Tourists are returning in large numbers, particularly on weekends when they flock to the city and hotels are selling out rooms. But without enough workers, the tourism industry is scrambling to serve the city’s guests.

The reasons are many but include low wages, concerns about personal safety, lack of childcare and the fact many longtime employees of the industry moved on when they were thrown out of work during the pandemic.

On ExpressNews.com: Tourists are back, but San Antonio’s tourist attractions lack workers to serve them

Using the applicants-to-employers ratio, Zachry Hospitality, which owns Hilton Palacio del Rio and Staybridge Suites downtown, got more than its fair share of attention. Its booth saw 10 or 12 visitors by the end of the job fair at 2 p.m.

“We have a little bit of everything,” Liz Miera, employment manager at Hilton Palacio del Rio, said of the positions on offer.

The pay ranged. Server jobs were available at $5.50 an hour plus tips, while housekeepers could earn $15 an hour.

Miera remained optimistic despite the slim pickings. She had made an offer to an applicant interested in one of the valet positions and was awaiting a response. She also had several follow-up interviews scheduled for other positions.

“If we get one person. I think it’s a great thing,” she said, a reflection of the scarcity of workers willing to take jobs in the tourism industry.

The job fair occurred the same week federal supplemental and extended unemployment payments ended in Texas. Gov. Greg Abbott cut the federal benefits more than two months early amid his insistence they are driving the shortage of applicants in tourism, retail and other industries.

The $300 weekly federal supplement to state unemployment insurance is gone as well as extensions of time to collect unemployment for those who had exhausted 26 weeks of regular benefits.

Unemployment pay for gig workers and those who own their own business also disappeared.

Using Abbott’s logic, the job fair should have attracted many applicants. But economists and labor analysts say a variety of factors are contributing to the continuing labor storage in the tourism — but not any one thing.

“COVID is definitely a part of it,” said Todd Vachon, a postdoctoral associate in the Department of Labor Studies and Employment Relations at Rutgers University. “These were jobs that were low paying to begin with, then you add on that you will be exposing yourself to billions of strangers every week, including those who possibly didn’t get the vaccine.”

Some of the jobs being offered last week paid barely above the Texas minimum wage of $7.25 an hour, though positions with wages in the $10-$12 an hour range were more typical. Even that left some job seekers wondering how they’d make ends meet.

“There were more low-paying jobs than I expected,” said Jason Huerta, who attended the fair in search of work. “I’m looking for $14-$16 an hour.”

He said he’d worked for a Toyota parts supplier but was laid off in December. His former employer cut back after the the vehicle manufacturer switched suppliers for its new Tundra truck, which is built in San Antonio.

Now, he’s willing to take any position that pays decently. Huerta planned to apply online later to two of the exhibitors at the job fair: the San Antonio Zoo and San Antonio International Airport.

The city-run airport was offering one of the highest starting wages seen at the fair.

All 70 of its open jobs were paying a minimum of $15 an hour plus health benefits and a pension plan. A city of San Antonio human resources officer told applicants that $15 an hour was the minimum for any city job, including those at San Antonio International.

The positions available ranged from customer service representatives who direct airport customers to ticket counters and flights to cashiers for airport parking lots.

On ExpressNews.com:Visit SA: San Antonio’s tourism might not fully recover until end of 2023

Just several feet away from the city’s department of aviation booth, however, the contrast in pay among airport jobs became clear.

Prospect Airport Services, a private company that employs baggage handlers for the airport, was offering $8.81 an hour. It also employs passenger service attendants who transport passengers in wheelchairs for $7.53 an hour, plus optional tips.

Several people were inquiring about Prospect’s jobs because of its bonus program — $1,250 after 90 days of work and another $1,250 after 180 days, said Cesar Jimenez, the company’s general manager at San Antonio International.

He said from 10 to 15 positions were available because Prospect has lost workers to other companies that pay more. But he noted that, even before the pandemic, “We always had openings.”

The company that cleans the city-owned Alamodome for the job fair was also hiring. Selrico Services had 20 janitorial job openings but few takers Wednesday.

The company is down to 12 janitors and even temporary staffing agencies haven’t been able to fill the positions, said Leslie Rodriguez, a human resources official with the firm.

Rodriguez acknowledged the $10-$10.50 hourly wage for the cleaning jobs might be a hindrance in attracting workers.

“I really think we need bump up our pay,” she said. Rodriguez said she has discussed the issue with the company’s owner but no action had been taken.

For some employers, the job fair was not only about hiring; it was providing hope that the COVID-19 pandemic would continue to recede, allowing their businesses to flourish again.

Live Nation, which stages concerts, plays, and other shows at the Aztec Theater downtown, began having events again at the iconic entertainment center in April after a closure of more than a year.

The Aztec’s box office manager, who is employed by Live Nation, was excited.

“We sold out our first rock and roll concert last week,” said Krystal Mystic. Now, she’s looking for a few part-time employees to join her team.

Live Nation had 30 open part-time positions for box office workers, ushers and security guards. She said the 25-hour-a-week positions start at $10 an hour but can go up to $15 an hour.

Live Nation didn’t hire anyone at the job fair; it was urging those who stopped by their booth to apply online.

“If we can get a couple of superstars, it will be worth it,” she said of the effort.

Not all the positions at the job fair were low-paying.

Graves, of the La Cantera Resort & Spa, said the complex had an open chef’s position that paid around $60,000 a year. The Witte Museum was also on hand at the job fair and inviting applicants to apply to be its vice president of development.

Al Powers, the museum’s human resources manager, said the salary would depend on experience but declined to offer specifics.

Some employers have increased wages in response to the shortage of workers.

Graves said housekeeping position salaries had increased to $14 from $10 an hour over the past few months, part of the effort to attract more workers. The hotel is also offering a $750 signing bonus.

She attributed the labor shortage to employees leaving the hospitality industry amid the COVID-19 pandemic, when La Cantera and other lodging establishments closed down to help stop the spread of the virus. Now, some of those aren’t sure about coming back.

“A lot of people felt working in a hotel was unstable and unsafe,” Graves said.

Until hiring picks up, hotels, restaurants and tourist attractions are struggling to offer full services without needed workers.

A senior economist at the Federal Reserve Bank of Dallas agreed that some workers have left the tourism industry permanently for higher-paying jobs in other sectors. Economist Keith Phillips also said a lack of childcare for parents whose children have been in remote learning or whose children aren’t going to camp, was contributing to the tourism job shortage.

“A lot of summer camps did not go on this year,” he said.

At the end of May, labor data compiled by the Fed showed 120,397 tourism industry jobs in the San Antonio metro area. That was down 13.3 percent from pre-pandemic levels in February 2020.

The industry began rehiring in May 2020 after hotels, restaurants and tourist attractions began to reopen after the pandemic-induced shutdowns. Jobs are up 27 percent this May from the same month last year.

Phillips said a full recovery to pre-pandemic employment levels could occur in 2022, assuming business travel including conventions and meetings start to pick up and workers can be found to staff the industry. So far, leisure travel is leading the rebound.

The 54-employee organization is still down 30 workers from pre-pandemic levels because of budget cuts forced by a decline in hotel tax revenue, which mainly funds the organization. Large increases in numbers of tourists in recent months is allowing the two jobs to be brought back, said Richard Oliver, the organization’s director of partner and community relations.

Oliver said the number of daily visitors to the information center had increased from the low 300s in March to an average of more than 800 a day in recent weeks. That means more representatives are needed to tout San Antonio.

“Things heated up and they heated up quickly,” he said.